Jackson Street Bar Lansdowne have taken the lead in the Bidwill Cup at the end of the first round by beating Wairarapa Mitsubishi Greytown at Greytown on Saturday.

The defending champions made light work of chasing down Greytown’s total of 228 runs for the loss of eight wickets off 55 overs, reaching the target in the 27th over.

It was a 142-run third wicket partnership in just 17 overs between Greg Dennes-Wilson and Robbie Speers that lifted Lansdowne to the impressive victory.

Speers was all aggression in scoring 88 not out, with 70 of those runs coming from boundaries. He hit 11 fours and five sixes and faced 58 balls.

Dennes-Wilson also took the long handle to the Greytown bowling attack, scoring 73 off 57 balls, including 13 fours and one six.

Earlier, Greytown’s Tim Fenwick and Cuong Truong added 140 runs for the third wicket to give the home side a respectable total to defend.

Fenwick scored 77, off 75 balls including 13 fours, while Truong was more circumspect. His 61 came off 125 ball and featured eight fours.

Speers was the best of the Lansdowne bowlers, claiming 4-38 with his leg-spin on the low slow pitch.

But Red Star can probably look back at their failure to declare earlier, having already posted an almost insurmountable target, as a significant reason why they didn’t walk away with maximum points.

It was a mammoth third-wicket partnership for Red Star that was highlight of the game. 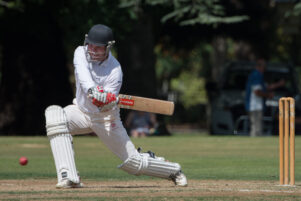 Robbie Anderson [127] combined with Brock Price in a 246-run partnership for Red Star.

Red Star finally declared upon Price’s dismissal with the score at 324-4, giving Marist 45 overs to bat out.

The Marist batsmen struggled to counter the pace and accuracy of the Red Star bowling attack losing regular wickets.

Wairarapa rep Jared van Deventer led the way with a determined 71 [89 balls, including 14 fours] but generally lacked support at the other end.

After van Deventer was dismissed at 111-6, Marist had some mini partnerships that soaked up overs and when they lost their ninth wicket, there were only 13 balls left to face.

Amish Pal, with 22 not out and Rushabh Sheth withstood the pressure to deny Red Star the outright win and valuable points.