Kianna Dawson was one of the young stars for Dalefield. PHOTOS/FILE

Michael O’Connor was preparing to pull the pin on his team’s 2019 Wellington Premier Division season two weeks before it started.

With only 14 players committed to playing in the women’s competition, Dalefield coach O’Connor was aware he did not have enough players to endure the rigours of the season as the team had struggled with similar numbers in 2018.

But two more two players committed, and the team comprising of a mix of experience and youth punched above their weight to finish a meritorious third in the Capital’s top competition.

That, O’Connor said, was an outstanding achievement.

“Considering we were quite depleted at the beginning of the season and having to replace 11 players from the previous year, to finish in the top four was a hefty goal. To finish third was a mighty effort that they can all be proud of.”

Many of the squad were college students, and O’Connor was full of praise for their work ethic.

“The students in particular have really put the effort in with the Waicol students training twice a week with Dalefield, twice with the school, then Friday night college competition, followed by Saturday Wellington Premier

One competition and once representative hockey started, that was their Sundays gone.

“That was seven days a week for at least three months.

“The St Matthew’s students would have been the same except one of their school practices was on the same night as ours.

“Never did they moan about it or say they were tired, they just got on and did it.”

Reese Robertson and Lauren Mahoney were members of the Wairarapa Under-18 team, while Kianna Dawson was included in the Wellington Under-18 team. 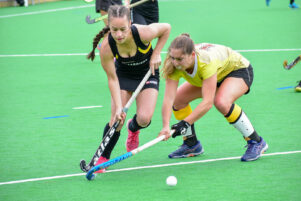 A bad knee injury to captain, Katherine van Woerkom, had her sidelined for five weeks early in the season.

O’Connor said the experience of van Woerkom and vice-captain Michael O’Connor [his daughter] shone through when needed.

“Katherine and Michael’s contribution to the team cannot be overstated. They led the girls in each game by playing hard and giving advice and encouragement where needed.

“Even though Katherine’s injury hindered her fitness, her instruction and organising skills on the turf was invaluable, along with Michael’s constant ground cover and general effort.”

O’Connor cited the 4-3 win over competition winners, Harbour City, on June 26, and their 3-0 win over Victoria in the third-fourth playoffs as notable performances.