CAL ROBERTS
cal.roberts@age.co.nz
It may have happened 50 years ago, but former police officer Hapeta ‘Hoppy’ Hodges remembers the day of the Wahine disaster very clearly.
He spent it on the beach at Pencarrow, dragging people to safety as they washed ashore.
Now retired in Masterton, 82-year-old Mr Hodges is travelling to Wellington today to take part in the 50th anniversary commemoration services.
The former Naenae constable was due to start his shift in horrendous weather conditions as tropical cyclone Giselle lashed the country.
“I thought, ‘Crikey, those so-and-sos want me to get out there and work in this weather’.”
He was tending to storm-damaged Stokes Valley when he began to realise the day would be very different.
“There was all this excitement over the radio about a ship tipping over down at the entrance of the harbour.”
Around 6am on April 10, 1968, the Wahine entered Wellington Harbour. “I thought, they’ll be calling for me soon . . . calling for everyone – even the poor buggers on their day off.”
Not long after, he was called to the Lower Hutt station.
He had a long shift ahead and had not eaten any breakfast. By the time he’d had a bite to eat and been briefed on the situation, people had begun jumping from the vessel into violent waters.
“I was put in a patrol car with about four other guys and we shot out to Eastbourne.”
They took the car as far as they could, stopping at Burdan’s Gate, just shy of the beach.
He described the scene as chaotic.
When the policemen arrived, lifeboats from the Wahine were approaching the shore. They rushed to meet them. 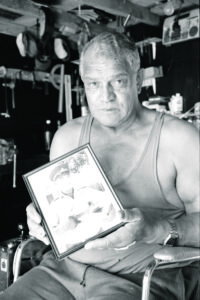 Mr Hodges and the other officers got about 400m down the beach, looking towards Pencarrow Head.
There, he saw the sinking ferry.
“There was this bloody thing — tipped over.”
He got stuck in, helping anyone he could on the beach.
“When the boats started pulling up, we were busy as hell.”
“One poor bugger, he’d jumped off and took such a gutsful of water. We got him to the senior sergeant where the doctor was.”
The constable waded into the water to help drag lifeboats ashore — “You had to. Some of the people had babies. We were frozen stiff.”
He describes seeing a man climb out of the sea by himself, only to collapse on the shore.
The people straggling in were distraught, cold, and weak from fighting the waves. Some died on the beach
from sheer exhaustion.
“That carried on till all the boats had come in.”
Mr Hodges came across a woman carrying a child, struggling to get up the beach to safety.
His uniform, while warm, was holding him back in his rescue efforts.
He took off his jacket and wrapped it around the woman.
“The baby was screaming, and she was weak, so I took the baby off her.”
Mr Hodges made sure the baby was placed safely under covers.
“Was I bloody cold.”
He said the day on the beach when the Wahine sank was like no other. The toll it took on the constable was still apparent as he recalled his actions 50 years later.
“It was tough. That lady with the baby . . . I nearly cried, you know.
“I didn’t cry, but I felt like it.”