Dalefield and Wairarapa hockey stalwart, Murray Nielsen, passed away this week after a long battle with cancer and both teams will wear black armbands in his memory. 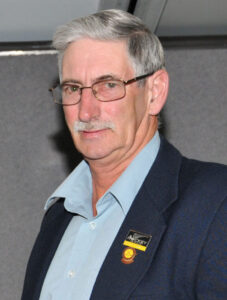 The men return from a two-week break to take on a young Harbour City side at the National Hockey Stadium.

Dalefield are unbeaten and share the lead in the championship with Hutt United on 14 points.

Harbour City are in third place on nine points, having lost one game.

That loss was to Victoria University, a team that Dalefield comfortably beat 9-1 in April.

The Wairarapa-based team had the bye two weeks ago and there was no play last weekend due to the National Under-21 tournament, won by a Capital side that included four Dalefield players — Jacob Harp, Jayan Parbhu, Jordan Cohen, and Ethan Presow.

Dalefield co-manager Bernie Lett said the Under-21 players were back and full of confidence.

The two-week break, while frustrating in trying to maintain momentum, had done the other players no harm, he said.

Lett is uncertain what to expect.

“Harbour City have been one of the better teams, but they haven’t got the NHL players they used to have. They have a lot of new young players, but no real name players.

“On paper, it should be a comfortable win, but they will be a dangerous team.”

Apart from the absence of the experienced Trent Lett, Dalefield will be at full strength for the match.

The experienced defender has not recovered from a nasty gash on her kneecap suffered in the team’s 5-0 win over Toa three weeks ago.

Coach Michael O’Connor said van Woerkom was still hobbling quite badly and was a week-to-week proposition.

“Apart from Katherine, everyone else is on deck, we’ve got four subs on the bench so we should be right.”

O’Connor is expecting a good game with Karori, who sit in sixth place in the league on three points, four behind Dalefield in third place.

“They’ve given us good games in the past. They’re like us – quite young and they like to play an expansive game and keep the ball moving.”

The women’s fixture against Karori hits off at 1.45pm at the National Hockey Stadium, while the men’s game against Harbour City starts at 3.45pm.