The Tararua Builders riders, in white, in the 2020 criterium race, from right to left, Mike Wilkinson, Andrew Linton and Andrew Curtis-Cody. PHOTO/SUPPLIED

Two different race formats could see the leaders’ jerseys change hands in all four categories in the third day of racing in Trust House North Island Teams Series this weekend.

Riders will tackle two very different courses on Sunday – the first a criterium circuit in the morning and the second a team time trial in the afternoon.

The criterium will likely suit the sprinters, and race director Jorge Sandoval said the 1.1km Waingawa circuit would prove challenging to riders because racing on short circuits at fast speeds does not suit many riders.

“A criterium, or crit, is a bike race consisting of several laps around a closed circuit and usually the first 20 minutes are fast and furious as the strong attack while others hang on for survival to the whip created at the back of the pack,” said Sandoval.

“For some riders it’s just what they thrive on, but it’s not everyone’s cup of tea, because riders need a certain set of skills to navigate a criterium.”

He said that riders must have the ability to corner rapidly and sharply, with as little touching of fellow riders as possible, while holding their line on the road.

“In order to claim the best position, you have to possess pristine ability to decide to sprint at perfectly timed opportunities to make a successful attack.”

Sandoval said the criterium was a great opportunity for members of the public to watch some spectacular fast racing.

The focus for riders will change in the afternoon with a team time trial in the Matahiwi area. The teams of eight riders will start at two-minute intervals and race against the clock over a 15km mostly flat course. 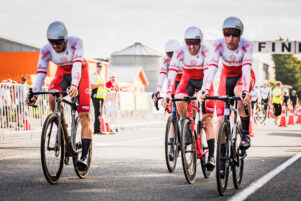 The Coupland’s-Booth’s Group team finish the team time trial in the 2021 NZ Cycle Classic. The team will line up for Sunday’s two races in the North Island team series. PHOTO/FILE

“Team time trials are an all-out effort right from the start,” said Sandoval.

“The idea is that each rider will take turns pulling the group at significantly higher power for a short period of time, and the goal is to keep the team’s speed consistent as each team needs to have a minimum of four of their eight riders finishing together to get an official time.”

Others to watch for in the top class are Tokyo Olympian Nicholas Kergozou and Callum Nisbet, both from the Coupland’s-Booth’s Group team, as well as Dave Weaver from Wheelworks.

The category four races are expected to be fought out among riders from the Masterton-based Tararua Builders Racing and teams from Manawatu, Wellington, and Kapiti.

The criterium races in Waingawa start at 10am with the team’s time trial scheduled for 2pm.