A Wairarapa mother-and-daughter team – one discovering her “superpower” as a wahine Maori, the other embracing the power of allyship – are in contention for a major national creative award.

Jann Lenihan and her daughter Nan Walden have both been selected as finalists for the 2022 Molly Morpeth Canaday Award: open to artists from all over New Zealand, with over $20,000 in prize money available.

This year’s awards are focused on three-dimensional art – with just 62 artworks shortlisted from a pool of close to 300 applicants.

The selected artworks will be displayed at the Whakatane Library and Exhibition Centre, with the exhibition to open next month.

Though Lenihan and Walden worked on separate pieces, their artworks poignantly complement one another: both submitting clothing items representing their process of self-discovery and providing commentary on racial inequality in Aotearoa. 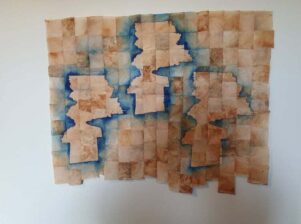 One of Lenihan’s artworks, made from used tea bags.

Masterton-based Lenihan, a retired art teacher, submitted a T-shirt constructed from recycled tea bags – representing New Zealand’s colonial past, and reflecting her journey towards becoming a stronger ally to Maori.

Walden (Te Aitanga-a-Mahaki), who grew up in Wairarapa but lives in Wellington, submitted a miniature korowai, emblazoned with the words “Half Cast” (a play on the derogatory term “half caste”).

Her korowai represents her reclaiming her identity as a New Zealander of mixed ethnicity, and critiques the antiquated system of defining race by “blood percentage”.

Walden described the opportunity to exhibit with her mother as “a thing of beauty”: as their work provides a blueprint for a what a bicultural New Zealand could look like.

“It represents a partnership – Maori and Pakeha working together as a team – and shows that views on our indigenous culture are changing. It’s a stepping-stone towards what Aotearoa could be.

“Mum and I were so excited when we found out we’d both been chosen – we were on the phone together, jumping up and down and screaming!”

“It was exciting to be in the exhibition last year – but more so to see my work side by side with my daughter’s,” she said.

“As a creative people, we spark off each other, and inspire one another. It’s very nourishing.”

She taught at Makoura College for 10 years, before retiring to focus on her art.

More recently, her work has taken on a political tone, informed by her research into New Zealand history and the writings of environmental activist Tina Ngata.

When referring to non-Maori, Ngata uses the term “tangata tiriti” (people who are here by virtue of the Treaty of Waitangi) and explores how they can be more effective partners to Maori: including acknowledging the harm caused by colonialism.

“It’s about owning our history – not feeling guilt about the past but recognising that we have a privilege that comes with being part of the dominant culture,” Lenihan said.

“We live in a society based around Eurocentric systems, and it’s important to acknowledge that we, as Pakeha, benefit from those systems.

“As tangata tiriti and an artist, It is my responsibility to carry on that conversation, even though it may be uncomfortable.

“That’s the point of art – to disturb the comfortable and comfort the disturbed.”

The T-shirt Lenihan submitted for Molly Morpeth, has plenty of colonial references: the tea bags represent tea as the “ultimate symbol of British imperialism” and the grid pattern hints at the linear way in which English settlers laid out New Zealand towns.

She attached a label with “cleaning instructions”, with the phrases “unconscious bias binding” and “do not whitewash”.

“I love puns. Humour is great way of sharing a message – people laugh, then stop to think.

“I did a T-shirt as it’s a common item people wear without question. It’s like the privilege we have as Pakeha – it’s everywhere, but we don’t question it.”

Walden’s art is similarly inspired by cultural identity and her journey to connect with her whakapapa.

While at school, she said she felt “hugely ashamed” to be Maori.

“Detentions was always full of Maori students – so it was to my advantage not to advertise I was Maori. I hid behind my light skin.

“It wasn’t until I lived overseas that I realised being Maori was, actually, a superpower.”

Walden has a degree in fashion design – but left the fashion industry after becoming disillusioned with its unsustainable practices.

She retrained as a teacher and, while making students’ kapa haka costumes, discovered a passion for making contemporary korowai – eventually incorporating korowai design into her soft materials and technology classes.

With tutelage from a school parent, Walden explored traditional weaving techniques – including working with muka, a silk-like fibre extracted from harakeke (flax) using a mussel shell.

Her Molly Morpeth entry is fashioned from muka and uses brown and pink tones to represent her mixed heritage.

The phrase “Half Cast”, woven into the korowai, is also a play on the process of “casting on” stitches in weaving.