Emergency services removing the motorcycle from the crash scene [above and below] in Solway on Sunday morning. PHOTOS/TOM TAYLOR 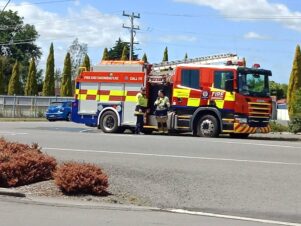 Two people were flown to Wellington Hospital on Sunday after two separate crashes.

A car flipped off the road outside of Martinborough in the early hours of Sunday morning.

Police received a callout to Fraters Rd, off White Rock Rd, at about 7.50am.

A nearby resident said a helicopter had landed on a neighbouring paddock at about 8.30pm.

The driver was subsequently airlifted to Wellington Hospital.

By 11.30am, the patient was in a stable condition at the hospital.

A second crash in Solway on Sunday morning left one person with serious leg injuries.

The crash, involving a motorcycle and a car, happened outside the Solway Caltex on High St around 10.10am.

A Caltex worker said that the motorcycle had rolled some distance along the road.

The motorcyclist was flown to Wellington Hospital with serious leg injuries at about 11.30am.

By 4.30pm, the patient was still in a serious condition at the hospital.

The Serious Crash Unit was looking into the circumstances around the crash.

Another crash in Masterton later in the morning left one person with a sore shoulder.

The crash between a car and a pushbike happened on Kuripuni St at about 11.45am.