A ute and trailer ended up smashing into some trees on State Highway 2 in East Taratahi, Carterton, on Tuesday afternoon. PHOTO/JOHN LAZO-RON

Wairarapa emergency services were kept busy over the past 48 hours attending to several reported crashes and an engulfed campervan that was partially burnt to the ground.

A man is lucky to be unharmed after his ute and trailer crashed into some trees on State Highway 2 in Carterton on Tuesday afternoon.

Police responded to the crash in East Taratahi at 4.10pm, between Norfolk Rd and Norman Ave.

While there were no injuries to the driver, a police spokesperson said the cause for the driver veering off the road was still to be determined.

The crash slowed down traffic heading south towards Carterton.

A witness said he was unsure how the man avoided serious injury during peak hour.

“The bloke’s very lucky that’s for sure,” he said.

“I don’t know how he ended up where he did and avoided being hit by another vehicle when there was so many going in the opposite direction at the time.”

The Carterton fire brigade also attended the crash but was not needed because the driver got out unharmed.

In an earlier incident, a bull was killed and a car written off after a collision on State Highway 53 in Tauherenikau early on Tuesday morning.

Fire and Emergency and police attended the crash at 3.30am on SH53 at the intersecting streets of Te Maire Rd and Wards Line in Tauherenikau.

Driver Chris Juggins was travelling home to Featherston from delivering newspapers in Martinborough when the collision happened, and was uninjured in the crash.

Martinborough fire chief Jake Hawkins said the bull was part of a group that managed to escape a paddock and wandered on to the 100kmh road.

Hawkins said it would have been difficult to have seen the bulls.

“The bulls were mostly black so he wouldn’t have had a chance seeing them on the road,” he said.

“One of those bulls jumped out in front of [Juggins] subsequently killing it and had his car written off at the same time.”

Hawkins said the bulls “obviously got scared” and ended up crashing through the fence of a neighbour’s paddock. He said the neighbour secured the bulls in the paddock until Fire and Emergency returned them to their paddocks.

The Martinborough fire brigade remained at the scene for more than an hour, diverting traffic while they waited for a tow truck to collect the vehicle.

Juggins said he no sight of the bulls.

“It was hard to see the bulls even with my headlights on high beam,” he said.

“It’s a hard one to describe because it’s one of those things that you don’t expect at that hour of the morning.”

“This annoys me to a certain degree,” he said.

“They shouldn’t have been out on a state highway in the first place. The farmer is liable now for the damage to my vehicle.” 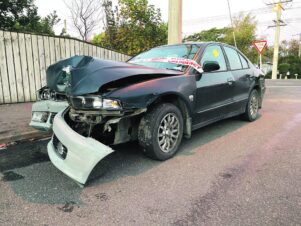 Early on Wednesday morning, a vehicle crashed into a power pole on Kent St in Carterton. PHOTO/SUE TEODORO

In another crash early on Wednesday morning, a vehicle crashed into a power pole on Kent St in Carterton.

Wellington Free Ambulance, police and the Carterton fire brigade attended the crash just before 2am.

An ambulance spokesperson said the driver had minor injuries and did not need to be transported to hospital.

A campervan also caught on fire on SH53 in Featherston on Wednesday morning.

The fire was reported just after 11am with the Featherston and Carterton fire brigades in attendance.

A person who saw the campervan in flames as they drove past stopped and alerted the owner.

Featherston fire chief Colin McKenna said no one was injured in the fire and it was not being treated as suspicious.

“I understand that the owner had been doing some work on [the campervan] but he wasn’t there when it caught on fire,” he said.

“We presume it has something to do with whatever he was doing to it but we’re not exactly sure.”

Although the campervan was engulfed, McKenna said it took 30 minutes to extinguish the fire.

“It was certainly going pretty well, but it was easy to put out, but unfortunately it wouldn’t be repairable.”