Many businesses must implement new regulations when New Zealand enters the next phase of managing covid-19. TOM TAYLOR asked business owners how prepared they were for the traffic light system.

One hospitality business is getting ready to close its doors to diners when the new system comes into effect.

New Zealand is set to move from the four-tiered alert system to a ‘traffic light’ system, also known as the Covid-19 Protection Framework, at 11.59pm on December 2.

Cabinet will confirm this decision on November 29.

One of the main concerns was a lack of clarity on the rules at each colour of the new system and their application to different sorts of businesses. Record keeping and scanning would be required at all levels of the new system, and face coverings would be mandatory on flights.

There would be no limits on numbers for gatherings at the green level – provided vaccination certificates were used. People who had two doses of the vaccination could access their certificate – known as ‘My Vaccine Pass’ – through the website ‘My Covid Record’.

The certificate could be saved to a phone, added to Apple Wallet or Google Pay, or printed to use in paper form.

At the orange level, face coverings would also be mandatory on public transport and in taxis, retail stores, and public venues.

Public facilities and retail stores would be open with limits on capacity. As at the green level, there would be no limits on numbers for gatherings, provided vaccination certificates were used.

At the red level, face coverings would be encouraged whenever leaving the house. Public facilities could still open to up to 100 people, based on one-metre distancing, provided vaccination certificates were used.

However, each level would come with more restrictions for businesses that chose not to request vaccination certificates from people.

Masterton restaurant Saint Sebastian was one business that had decided not to ask customers for proof of vaccination.

Owner Caleb Kloeg’s decision meant that he would not be able to open the restaurant to diners at orange or red levels.

Kloeg said he would follow the government’s guidelines for places where vaccination certificates were not used, as laid out on the Unite Against Covid-19 website.

At orange and red levels, hospitality businesses that did not request proof of vaccine would be restricted to contactless service – similar to the current alert levels 3 and 4.

“It’s the only way at this point that we can include everyone,” Kloeg said of his decision.

He said he would not require his employees to get vaccinated.

“The majority of my staff are vaccinated – I’ve got about 60 per cent that are. But that’s entirely their decision to make.”

Kloeg said the restaurant would maintain a high level of safety through each of the traffic light levels.

“We’re focused on everyone’s safety, on including everyone as much as possible, and essentially creating a happy environment – good vibes – within those sorts of parameters.” 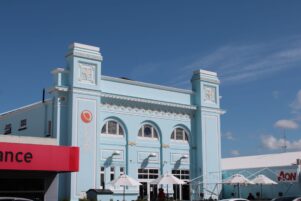 Masterton restaurant Saint Sebastian will close to diners but remain open for takeaways and delivery when the new traffic light system comes into effect. PHOTO/TOM TAYLOR

At the green level, hospitality businesses that did not request proof of vaccine would be limited to 100 people, based on one-metre physical distancing – similar to the current alert level 2 rules. People would need to be seated and separated.

“Green is business as it is now, with safety measures in place,” Kloeg said.

Other business owners and managers across the region voiced their concerns about the new system.

“It is clear as mud. That is the short answer to a very long and concerning question,” he said.

Masterton Foodbank manager Jenna Matchett said she had found it hard to determine what the traffic light system meant for the community service.

“We sort of fall between the cracks,” she said.

Matchett said most of her workforce were already vaccinated, but she was not yet prepared to enforce mandatory vaccination.

People would not need to prove their vaccination status to access food banks, supermarkets, pharmacies, health and disability services, or petrol stations.

Covid-19 Response Minister Chris Hipkins said proof of vaccination was also not needed on public transport other than air travel or when accessing housing and housing support services.

Children under the age of 12 would not be required to show proof of vaccination.