Cam Ravenwood [with ball] is one of several talented playmakers at East Coast. PHOTOS/FILE

In the second part of his club rugby preview, Times-Age sportswriter looks at the four Country teams in the Lane Penn Trophy.

Utility back Jack Wakeling, who missed last season after breaking a leg in his Wairarapa-Bush representative debut against the NZ Army in 2019, is back.

With talented playmakers Bryan Arnold and Cam Ravenwood, the Coasties have the makings of a very competitive team.

Matenga is happy with the depth of the squad and is satisfied with their buildup, which included a 26-17 win over Eketahuna.

“Preseason has been very good, it’s helped us try a few things and identified a few areas that need work and overall, it was very positive,” he said.

“I think we have a better understanding of each other and how we play compared to last year, and this has contributed to the coaching staff advancing our skill sets a lot more this year.”

Matenga said the team were focused on being better prepared and being more accurate this season.

“If we can achieve these, then hopefully we can be competitive in this year’s competition.”

Lack of depth in the squad could prove to be Gladstone’s Achilles heel.

The 2017-18 champions and 2019 runners-up struggled to seventh in last season’s truncated championship, however, long-term coach Steve Thompson is hoping for better in 2021.

“I think we will be a better team than last season. Finishing seventh is not ideal in my book,” he said.

“There are lots of things to learn from, and my aspirations would be in the top half of the table if not better.”

To achieve that, Thompson will have to do without three of his most experienced campaigners – frontrower Richard Puddy and midfield back Cameron Hayton, both retired, and the ‘magic man’ Inia Katia, transferred to Carterton. 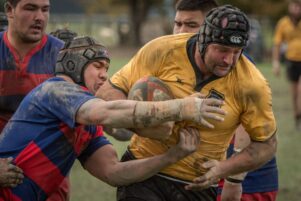 Andrew McLean [with ball] returns to add steel to the Gladstone forward pack.

After a couple of years away because of work commitments veteran lock Andrew McLean, who brings a hard edge and a ton of experience to the forward pack, is back.

Thompson said, “the preseason has been slow with lower numbers at training than I would like, but that seems to be an issue for several teams in the competition.”

Gladstone played Martinborough and Greytown in the preseason festival at Martinborough, and the results satisfied Thompson.

“As our first hitout we played quite well, exceeding my expectations, considering our preparation time. But it was a pity some teams had to pull out due to a combination of low numbers, injuries, and unavailability.”

The 2019 champions and 2020 beaten semifinalists have a settled squad for the start of the season but have lost some key players due to injury.

Talented loose forwards Logan Flutey and Stan Rhind are both out for an extended period after suffering dislocated elbows and veteran first-five Tim Priest’s involvement is likely to be sporadic. Logan Flutey [left] is out with injury, and Tim Priest [with ball] will likely have limited involvement for Martinborough.

“It’s disheartening losing those loose forwards who are thing is probably the young guys from last year are a year older and more experienced, such as [prop] Ty Waight, who was straight out of Waicol last year, and now he’s had a year in seniors. There are a couple of other guys like that,” said coach James Bruce.

There are some exciting additions to the club, including midfield back Nick Blundell, a former New Zealand Under-19 cricket international, who has moved to the town, flanker Jake

Goodger, and talented back Shane Colton, a standout for Rathkeale last year. Bruce said he was a clever player who read the game very well.

As for his team’s prospects throughout the season, Bruce is confident he has the talent to be serious championship contenders.

“We’ve had a few preseason games, and there were some guys I didn’t think would be good enough, but they are, and we had a few surprises which are kind of quite cool.

“We’ve only just got enough numbers, but we have a good team culture. If we can stay injury-free and get a couple of injured players back, we will probably be well and truly up there.”

As for the three games in the Lane Penn Trophy, Bruce said they’re using it as a chance to experiment, but
realistically it’s just like the first round of a two-round competition.

“The biggest thing is that we won’t get two shots at some teams. We’ll have two shots at the country teams, but we will have no first-hand idea of Pioneer, Marist, Carterton, and Greytown, and that’s a bit disappointing.”

Like other clubs, Eketahuna are struggling for numbers, with the forwards particularly hard hit.

Gone from last season’s beaten semifinalists are inspirational captain and No.8 Kirk Tufuga, to Australia, prop Max Tufuga, utility back Nick Birchall and halfback Lee Thompson [all to Manawatu], and locks Tom McKay and Tom Simmers.

Wai-Bush’s northernmost premier club have attracted some exciting newcomers in Matthew Raleigh, an outside back who has represented Poverty Bay, ex-Mid Canterbury lock-loose forward Vesi Luatua, Rhys Christiansen, and outside back from Manawatu, and English prop Daniel Neal, who is working at Pukaha Mt Bruce.

The biggest losses are in the tight five with Max Tufuga, McKay, and Simmers. Assistant coach Graeme Cheetham said the team would be quite light upfront.

“The backline is quite exciting, and we have a really good back three, but we might struggle to get them enough quality ball,” he said.

Eketahuna have had a few preseason games, including a loss to East Coast, and Cheetham felt that should see them in good stead to challenge for the Lane Penn Trophy.

“We’re treating it pretty seriously, we’ve been building nicely, and we’ve been lacking in numbers, but we want to start with a hiss and a roar. It would be a great trophy to have in the cabinet.”

Twelve teams will line up for the Senior Reserve championship, which kicked off  last night under lights at Trust House Memorial with Masterton Red Star taking on Gladstone.

Masterton Red Star and Tuhirangi return to the competition after missing last season. Both are expected to be among the frontrunners.

The teams will play a full round-robin before splitting into three groups of four for the playoffs.

This is always a tricky encounter for Martinborough, with a fired-up home side in front of a big home crowd. There’s plenty of firepower in both teams, and this should be an entertaining encounter.