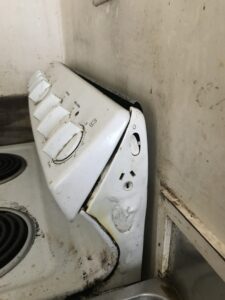 Bill Wilson’s council flat oven blew up four months ago and he still has no oven to cook in because the South Wairarapa District Council says it can’t source one to fit the space.

The fire started at a power socket on the oven that melted, and the smoke stained the wall behind it remains blackened.

Wilson pays $100 a week for a small bedsit in the Westhaven flats block on West St, Greytown, owned by ratepayers and managed by SWDC staff.

The 63-year-old tenant has been renting it for 24 years.

After the fire, an electrician came and disconnected the power to the stove from outside the flat and Wilson was told it was too late for the council to buy and install a new stove before the covid-19 lockdown.

The council offered him a hot plate, but he chose to use his frying pan.

After visiting him a couple of weeks ago, Wilson’s friend contacted the Times-Age anonymously because he was concerned Wilson had been left without a working stove for too long.

Wilson is dependent on state support and had no Home Management support over the lockdown period.

He also requires some level of mental healthcare.

“An oven is an essential item and should’ve been fixed,” Wilson’s friend said.

“He does his casseroles in it. The flat is neglected and rundown.

“The other flats have been redecorated but Bill’s has been left for 20 years.

“Others got moved into hotels and had their flats fixed up but not this one.”

The flat has 1970s stained carpet, curtains, and wallpaper, and Wilson said it had been in a poor state for a “long, long period”.

SWDC councillor Alistair Plimmer said he raised his concerns several times about the state of the flats and this had triggered a budget for them to be refurbished.

But Wilson’s flat, number six, has only had the bathroom painted and repaired.

The council has said the flat’s oven was not a standard 60cm oven and it had not been able to source a replacement oven.

In mid-May, the council amenities officer came into his flat with her tape measure and measured the space for the oven.

An oven has not yet been installed.

The flats were put on the market in 2016 but didn’t attract a buyer.

Flat six is scheduled for plastering and painting later in the year.