Christmas is a joyous time for many children – but for those youngsters mourning the loss of someone special, the festive season can be a painful reminder of what’s missing from their lives.

So, a Masterton funeral director and artist have joined forces to help children process their grief, by way of some bold images and a pack of coloured pencils. 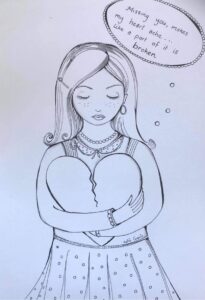 Katie Gracie has designed colouring-in packs to help with the grieving process.

To support its youngest clients through their loss, Wairarapa Funeral Services has added a series of colouring-in packs to its resources for bereaved whanau, giving children a welcome distraction throughout the intensity of funeral planning.

The packs, which have been distributed to funeral homes around the country, are a collaboration between Wairarapa Funeral Services owner-director Robert Milne, and his partner Katie Gracie, a painter, muralist and colouring-book artist.

Katie was inspired to create the packs by her daughter Audrey, and the time they spent together colouring in after the sudden loss of her father [and Audrey’s “Poppa”] in 2015.

Though she initially created the packs to help “take kids’ minds of the stress of the funeral”, both Katie and Robert know that grief continues beyond the traditional rituals.

In the lead-up to Christmas, Wairarapa Funeral Services are offering packs to any Wairarapa whanau grieving a loved one, regardless of the time passed since their funeral service.

Katie said Christmas could be a particularly difficult time for children missing a departed family member, and hoped the colouring packs would help them, and the adults in their lives, work through their emotions in a creative and therapeutic way.

“It’s great to be able to provide something tangible and practical to families who are hurting at this time of year,” Katie said.

“When you lose someone, the gap in your life seems so much larger at Christmas. Children notice there’s something different – there’s that empty spot at their school prizegiving, and an empty space at the table.

“And, for some kids, it can be really hard to verbalise how that makes them feel.”

“The colouring packs are a chance for kids to express themselves – and they can also give their parents and caregivers a tool to start a conversation,” Robert said

“Not everyone feels comfortable talking about death with children, so Katie’s drawings and words can give adults a prompt to help kids to open up.”

Both Robert and Katie have extensive experience in the funeral industry.

Robert is a seasoned funeral director and embalmer, having worked at Wairarapa Funeral Services for 21 years, before buying the business in April 2019.

Katie trained as an embalmer after leaving school, and spent a decade working in funeral homes throughout the Wellington region, before leaving the industry in 2008.

She has worked full-time as an artist for the past five years – and was excited to work on a project which combined “[her] two different worlds”.

The images she designed for the colouring packs were all representative of death and grief: including piwakawaka [which, in Maori culture, are messengers of death], ocean waves, tear filled-eyes, a young girl cradling a broken heart, and a boy carrying balloons, representing balloon releases which sometimes take place after funerals.

Some of the images include profound, yet child-friendly quotes about grief, as well as some sentence starters and prompts to encourage children to explore their feelings, either in writing or out loud.

“I didn’t want to include images that were overly religious, or so obviously about death that they were upsetting,” Katie said.

“I wanted to create something which helped families create a conversation and could be therapeutic to people of all ages.”

Robert hoped the packs would be especially helpful for children who lost a loved one during the covid-19 lockdown – and were unable to acknowledge that person’s life with an in-person funeral.

“As a funeral director, that was a difficult time. There’s no such thing as closure when it comes to death – but having those rituals where you get to come together, celebrate a life well-lived, and say farewell are an important part of the process.”

He said Wairarapa Funeral Services had received “completely positive” feedback on the packs and loves seeing them put to use – by all generations.

“Recently, we had a funeral where a lot of the person’s grandchildren attended.

“At the morning tea afterwards, all the grandkids were down on the floor, colouring in – kids aged five all the way up to in their 20s.”