College sports finally kick into action this weekend, with rugby and football teams involved in grading or warm-up games, while hockey enters a new era next week with their first games in the Intercity championships.

The covid-19 lockdown has resulted in most codes playing a truncated season limited to school term three.

The late start to the Central North Island competition has had the competition split into two divisions, north and south.

Rathkeale will play Lindisfarne and St John’s Hastings at home and have away fixtures against Feilding High School and Whanganui Collegiate.

Rathkeale will also host St Peter’s Cambridge on their bye weekend of July 25.

The championship will wrap up in September, with two weekends set aside for crossover games in Taupo.

The Wairarapa College First XV start their campaign to qualify for the Wellington premier championship in a grading game against Tawa College on Saturday at home. 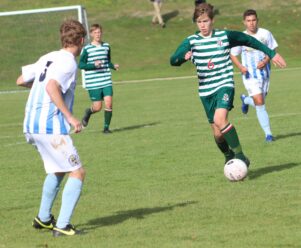 Waicol and Rathkeale begin their grading series to qualify for the Wellington premier youth championship, in which they both competed last year.

Rathkeale have retained much of the squad who finished a respectable 14th at the national premier tournament last season and confidence will be high of a top placing in Wellington.

To make the top division they must get past St Bernard’s College, who they host on Saturday, then Tawa College and Wellington College.

Waicol can field most of the team who won the Trident Trophy national satellite tournament for a second straight year in 2019.

They play Paraparaumu College at home on Saturday, then Hutt Valley High School and St Patrick’s Town in their group.

The top two teams in each of the four groups will qualify for the premier division, which will consist of seven games followed by playoffs. St Matt’s [green] and Waicol will be among the favoured teams in the new Intercity Championship.

The two Waicol teams, St Matthew’s Collegiate, and Rathkeale have regularly finished in the top four of the Wellington championships, often winning the titles.

A feature of the new competition is that all games are played midweek, with the boys on Wednesday nights and the girls on Thursday nights, making it easier for the schools’ better players to play for the Dalefield premier sides at the weekend.

The boys’ championship hits off on Wednesday with Rathkeale hosting Feilding High School and Waicol at home to Cornerstone [Palmerston North].

The feature game of the week should be the St Matt’s opener against Palmerston North Girls’ High School at Clareville. Both teams are regular competitors in the Federation Cup, the top national tournament.

Waicol commence with a game against Whanganui High School at Palmerston North.

Both competitions will consist of a full round-robin of seven games, followed by quarterfinals, semifinals and finals.