Colin McKenna has been chief of the Featherston fire brigade for 25 years. PHOTOS/JOHN LAZO-RON

Colin McKenna is not one for receiving praise, but after 46 years of devotion to the Featherston Fire Brigade, it’s time somebody sang them. JOHN LAZO-RON reports.

When Colin McKenna hears the emergency siren go off in Featherston, he immediately drops what he’s doing, usually while carrying out his caretaker tasks at Featherston School, and heads straight to the station.

You may be thinking, isn’t that just what all volunteer firefighters do?

Yes, but at 71 years of age, and after 46 years of doing just that – with 25 of them at the helm as chief – it’s hard not to recognise the exceptional efforts this man puts in for his community.

Colin began his journey into the Featherston Fire Brigade back in 1975.

His brother was part of the brigade and had convinced Colin to switch from another emergency service to combat flames.

“My brother was in the fire brigade way back then, and I was working with someone who was in it, and he kind of talked me into it,” he said.

“I was pretty keen back in those days to do more, and it just felt like it was a good thing to get into. I was also driving the ambulance at that stage, so I left that eventually to join the fire brigade.

“I just enjoy what I do. It’s a matter of helping people and being there for the community. “That’s why I do it.”

Colin said he hadn’t looked back, in time becoming what many have come to describe as one of the stalwarts of Featherston. But try and tell him that.

“Cool,” he laughed when told many looked up to him and saw him as a champion.

“I wouldn’t say that to be honest.

“I just enjoy doing what I’m doing, and I definitely don’t make myself out to be a hero.” 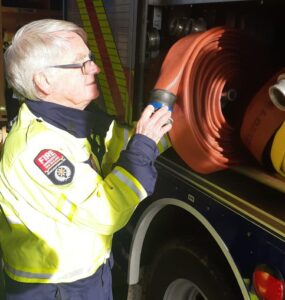 “It’s nice to think that people think of you that way, I guess, and it probably makes it harder to give up when people start talking like that, but it’s nice that people appreciate what you do.”

Wairarapa MP Kieran McAnulty, who said he had a bit to do with Colin in the fire brigade, was full of praise of Featherston’s fire chief.

“Every town and rural settlement in Wairarapa is reliant on the commitment and dedication of volunteers to perform the protection and care provided by Fire and Emergency NZ,” he said.

“Colin has personified that spirit by dedicating 46 years to the service of his community. In recent years, his leadership has cultivated a strong and inclusive culture at the Featherston Brigade and his recent QSM was a testament to this exemplary level of community service.”

Colin said being involved in emergency, there were always going to be great moments, but also dark ones.

Colin said he had great memories of his time with the Featherston brigade but also remembered the lows.

“The good side has always been the camaraderie,” he said.

“You’re in the brigade with thirty-odd other people, and you end up making great friends along the way. It’s been brilliant.

“Going to Australia and competing in [firefighter] competitions, that was always something I also enjoyed.

“Fire-wise, as soon as I was made chief, the Tui dairy company store burnt down. I didn’t appreciate that too much but unfortunately couldn’t save it.

“I’ve also been to one or two fires where death has taken place.

“Not long after I joined, a lady got severely burnt in a house fire, and she died. I also went to the one in Martinborough recently. They’re the bad sides.”

Colin said he has learnt over time not to dwell on those unfortunate moments.

“It’s not a good feeling, but I’ve learnt not to dwell on those sorts of things, and I find that quite good.

“You never know when the siren goes off, what you’re going to go to next. It’s a real mixed bag. You could be going to a car fire, or an accident, or a house fire, or just a bit of rubbish burning somewhere.”

Asked if the role was getting harder and if he planned to hang up the firefighter kit any time soon, Colin said he didn’t have a date but said it was probably coming.

“Heck yes,” he said regarding the ongoing physical toughness of the role.

“I’m starting to think someone should be sitting in and doing what I’m doing, but who knows. I’m still enjoying it.”