Coastal erosion is already visible at Mataikona as the ocean chews at the road. PHOTO/GRACE PRIOR

Experts say that 1-in-100-year coastal flooding events could become 1-in-5-year events and Wairarapa has one the worst rates of relative sea level rise in New Zealand. GRACE PRIOR takes a deep dive into the future of our fragile coastal communities.

A new National Institute for Water and Atmospheric Research [Niwa] report has shown rising seas have been slowly “causing a trifecta of impacts along coastlines in Aotearoa”.

“Our research shows that it’s the first of these three impacts, increasing flood risk, that’s likely to be the main driver of adaptation efforts by coastal communities. This tipping point is likely to be reached within two to three decades – sooner than many of us expect.

“This might currently only happen once every hundred years on average, but with rising seas it could increase to at least a five-yearly event within just two to three decades.”

Stephens said the research was based in Tauranga, but much was applicable to all New Zealand.

Greater Wellington Regional Council [GWRC] senior policy adviser for hazards and coasts, Iain Dawe confirmed this was relevant to the Wellington region too.

“One of the things about the Wellington region is that we have quite small tides, for the Wairarapa coast tides can range between 1.1 and 1.2 metres, Wellington ranges only about half a metre.”

He said coastal geomorphology had developed over time to “just deal” with the small tide range.

“What we’ve done is build all these roads over the last 100 years, and since then we’ve had almost a quarter of a metre of relative sea level rise, it’s significant.” 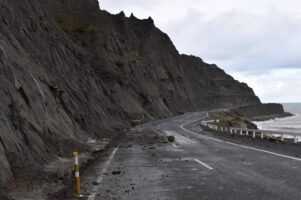 “Storm surges and extreme weather events’ impacts on the Cape Palliser Rd have likely increased and are likely to keep increasing due to climate change.”

Dawe said Wairarapa had one of the highest rates of sea level rise paired with tectonic subduction in the country, slipping three to four millimetres under water yearly.

He said GWRC had commissioned Niwa to look at rates of sea level rise through tide gauge records, which showed a strong upward trend in sea level rise. He said the records had run for over 130 years.

“Effectively we have a relative sea level rise as well as the land coming down, it’s a bit of a double whammy.”

Dawe said the lower Wairarapa valley would encounter problems because it was extremely low lying and an historic wetland.

“One of the issues we’re going to have to face with sea level rise is that it will interfere with the ability for flood waters to get out quickly.”

He said one of the concerns of the GWRC flood protection team was the potential to have flood waters backing up for longer periods of time.

Dawe said problems would also arise for small coastal communities like Tora, Mataikona, and Ngawi with only one coastal access road.

He said access to these communities would be threatened – there was already rock protection being put in to save the roads.

Dawe said that, unlike in Wellington, if a Wairarapa road was threatened, it could be moved elsewhere.

However, many small coastal communities were pushed up against big costal escarpments [bottom of a cliff or a steep slope].

“For some places they are trapped between a rock and a hard place, literally.”

He said rising sea levels would also pose a problem to the organisms that lived there.

Dawe said many of the areas home to important plants and animals were surrounded by roads, farmland, and flood protection activities.

“In many ways, unless we chose to withdraw some of that infrastructure back and allow that natural environment to expand backwards, it’s going to put stress on those ecosystems.”

“There is Maori-owned land there where generations of families have grown up, there is also an urupa [cemetery].”

Wilson said the area was also home to many farming and fishing families, as well as families with a desire to live closer to nature.

Stephens said adaptive actions like moving away from the coast could be driven by property owners facing difficulty gaining insurance or mortgages for properties, or by design through proactive policy rules.

Hopman said there was “no immediate risk for coastal communities”, but the council’s asset management plan for roading recognised the need to plan for the impacts of climate change.

A Carterton District Council [CDC] spokesperson said the impacts on our coastline was one of the more prominent climate change challenges we faced.

“As Wairarapa is already experiencing the effect of climate change, especially sea level rise and erosion, CDC is committed to doing its part in mitigating climate change.”

Dawe said there was an amount of sea level rise that was now unavoidable.

“Regardless of what we do, even if we have the most aggressive cuts, we’re still staring down the barrel of metres of sea level rise over the next few hundred years.”

He said it was uncertain if we were looking at having sea level rise of up to five metres, or if it would stop at a few.

Dawe said no matter what, there was going to be threats to small communities.

Looking to the future, Dawe said one of the best things residents could do was to get educated about what was happening.

“A lot of people get scared that the councils are going to clamp down and march them off their properties. It’s just not the case, there are changes that might have to happen over the long term, but these are discussions that take place over a long period of time with communities.”