Jackson Clendon, right, and co-driver Andrew Brooks after their class victory in the Rally of Whangarei. PHOTOS/GEOFF RIDDER

Masterton rally driver Jackson Clendon made the perfect start in his newly imported Ford Fiesta Rally4 in the Rally of Whangarei over the weekend. Jackson Clendon and Andrew Brooks on top of the podium.

Clendon and co-driver Andrew Brooks drove away with first place and maximum points in the two-wheel drive class and jumped to a share of the championship lead, an outstanding result given that the car, which had previously raced in the WRC Junior Championship, only arrived in Masterton from Poland 10 days ago.

Clendon and Brooks’ preparation for the rally, which was the second round of the national championship, consisted of several runs on a farm track at Kiriwhakapapa north of Masterton the previous Saturday.

Clendon, 19, made a steady start on Saturday and was handily placed in the top three over the morning stages, but as he and Brooks became noticeably more accustomed to the car, their times got quicker in the afternoon.

They took the lead in their class on Special Stage Seven and never relinquished it, eventually finishing 36.9 seconds ahead of Jordan Grant and co-driver Glenn Goldring in a Suzuki Swift, and finishing an impressive 12th overall, 17min 44sec behind runaway winner Hayden Paddon.

“I couldn’t ask for anymore, we got maximum points for the championship, and it couldn’t have gone any better,” Clendon said. 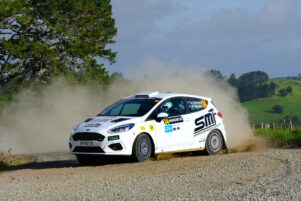 Jackson Clendon negotiates a corner during the Rally of Whangarei.

“The car was amazing straight away. There was nothing wrong with it, no issues with it at all. The car ran faultlessly, it was quick, it was easy to drive, it was perfect.”

Clendon felt that it took the morning stages to get used to the car, and the times got quicker as he became more confident.

He said the pair had no problems adapting to the left-hand drive car.

Regardless of the perfect start, Clendon said he won’t change his expectations in the championship and will take it event by event. In an ominous warning to his fellow competitors though, Clendon said there is still a lot of extra speed to be found in the car.

“Just little things everywhere and not really any majorly big thing that we can improve on, just those little things and we’ll get quite a bit quicker.”

Clendon’s next championship outing is the Rally South Canterbury in five weeks.