Clean sweep on the dirt Johnny Burkhart in action at the NZ Motocross Championships. PHOTOS/SUPPLIED

Burkhart, 38, was unbeaten in all five races and easily won the 35-39 age group from Sloan Frost [Eastbourne]. 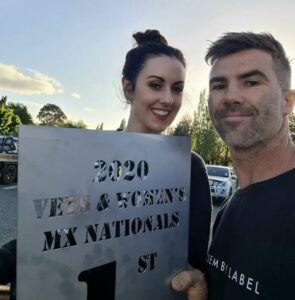 Johnny Burkhart and wife Dani showing off the championship trophy.

He then finished second in the meeting’s feature race behind former world number two Josh Coppins from Motueka.

Even to be competing at national level is a major achievement for Burkhart, whose burgeoning career was cut short by a serious injury in a crash in the 2005 NZ Supercross Championships.

“I was leading the points, and I crashed out in the second-to-last race. I spent a good 15 years out of the sport,” Burkhart said.

“I had about seven surgeries after that to save my wrist, and I was going to have one [hand] amputated – I was very lucky to keep it.

“I’ve got one fused wrist and a half-fused wrist. My left wrist is completely fused and has a steel rod in it, so I’ve got no wrist movement at all.”

Burkhart, along with brother Luke, were the rising stars of New Zealand motocross and had tasted success at national and international level before his crash.

“I was pretty much professional when I was younger and I won a lot of national titles and Australian titles. We raced all around the world – Indonesia, Thailand, Europe and Australia.”

The wrist injury ended Burkhart’s involvement in the sport until recently when his seven-year-old son Jett began riding, and his enthusiasm to get back on the bike returned.

“I’ve got back into the sport to sort of help younger kids with a bit of coaching with the Martinborough Motorcycle Club,” he said.

“It’s fun getting back into it and seeing all our old friends, and they have kids that are riding now.”

He was just taking it as a bit of fun until he thought about giving the nationals a crack.

“So, I did a fair bit of riding and training and yeah, I managed to pull it off, so it was pretty cool.”

Burkhart was thrilled with his success in Gore against a strong field.

He also relished the chance to take on his old foe Coppins in the feature race.

“I had a good battle with him, and it was good to race him again. He sat second in the world for about five or six years, and I had some pretty fierce battles with him over the years.”

As for the future, Burkart intends to continue coaching and travelling with his children to the various events.