For some parishioners at St Patrick’s Church in Masterton, displaying the controversial ‘All Lives Matter’ slogan on the church’s message board has left them feeling disappointed and uncomfortable.

‘All Lives Matter’ is a slogan which has arisen in response to the ‘Black Lives Matter’ movement which has seen thousands of people around the world protest violence and systemic racism towards black people.

The BLM movement was founded in 2013 but reached new levels in recent weeks after the death of George Floyd at the hands of the police in the United States.

Roc Travers, of Masterton, said as an indigenous member of the church since he was a child, he was especially disappointed.

“When a person states ‘Black Lives Matter’, it isn’t saying that black lives should be more important than other lives,” he said.

“Instead, it is addressing the problem that black lives are undervalued, especially in the US.

“This isn’t just a belief, it’s supported by centuries of discrimination, bias, and disregard for black lives.”

He said the sign showed that the church had failed to understand this.

“It’s a phrase that has an implicit ‘too’ at the end of it and it’s saddening that a church, already viewed as an archaic institution, can’t even modernise to the point where it is willing to fight against or understand racism.”

Masterton woman Roxanna Buchanan was so upset by the sign that she decided to make a few of her own, with the ‘Black Lives Matter’ slogan, with her children to hang on the fence outside the church.

She asked why the church wasn’t doing more to help Wairarapa’s homeless population if ‘all lives mattered’.

“It would be great for Masterton to get behind the ‘Black Lives Matter’ movement. It is a positive thing and peaceful. It has to start with change.”

She felt the church should apologise. Former churchgoer Angharad O’Flynn Lim, who is now mostly based in Wellington but does travel to Masterton, shared Travers’ sentiments.

“This ignorant message isn’t keeping in line with Pope Francis’ message of inclusion and denouncement of what he called the ‘sin of racism’.”

She said the church should be trying to encourage community togetherness and supporting their parishioners, rather than creating rifts and ignoring historical injustices and racism – both in America and in New Zealand. 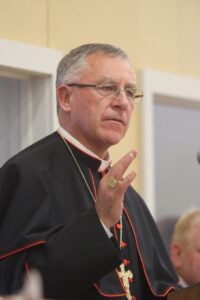 Even the Archbishop of Wellington, who oversees all parishes across the wider Wellington region, Cardinal John Dew [pictured right], agreed.

He said the ‘All Lives Matter’ sign was put up without the knowledge of the parish priest while he was away on leave.

“As archbishop for the diocese, I do not support the placement of that sign,” he said.

“It should not have been put up there. A church should not be politicised this way

“A church should be a safe space for everyone, a place where everyone feels welcome without being confronted with politicised material that some could find unwelcoming or offensive.”

The ‘All Lives Matter’ sign was vandalised on Sunday with letters seen hanging down and it has since been removed.