A champion Wairarapa woodchopper who died recently will remain etched in the record books forever.

John Alexander Bentley (Jock), died peacefully in Greytown on May 3, at the age of 83.

Mr Bentley holds several national records from his time competing in woodchopping competitions, and many will never be surpassed. 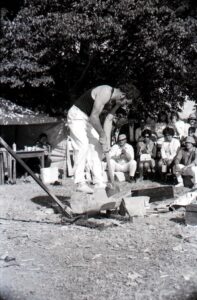 These include in the cotton poplar 900mm double hand saw (DHS), in which Mr Bentley and Noel Dickinson hold the record of 3mins 3secs, set in 1977.

“A lot of these records can’t be taken off of Jock either, as a new rule was brought in saying no records will be accepted from July 1, 2002 in the following wood types: cotton poplar, rimu, kahikatea, pigeonwood, tawa and pukatea.

“Also, cottonwood was reclassified from July 1, 2002 as hybrid poplar.”

Mr Baker said those two rules meant everybody who held records in those categories at the time the rules were brought in would never lose them.

“In Jock’s case, he will hold a few records forever.”

Mr Bentley was also captain of the Featherston rugby team that won the Wairarapa competition in the 1960s, and teammate Colin Burt (Collie) said he was an “outstanding man”.

Mr Burt is nearing 74 years of age, and first met Mr Bentley when he was about 17.

“Eleven or 12 from our team photograph have passed already, but there are some very good memories there.”

Both men were in the front row, and Mr Bentley was a man full of dedication and principle, Mr Burt said.

“I remember in one match we had an excitable player, and Jock stopped the game and ordered the player off.

“That was his sort of principles, and it always stuck in my mind . . . I hadn’t seen it done before, but he had the power to do that and he did.”

He said Mr Bentley was a gifted sportsman, but was also successful in business and with his own life.

“Jock was a success in most things he did.

“He was just one of those guys . . . he was a fine bloke, and quite an outstanding man.”