People at Monday’s protest against the importation of phosphorus from West Sahara. PHOTOS/GRACE PRIOR 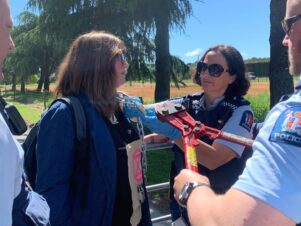 A police officer cutting the chains off protesters who had locked themselves on to a fence outside the Ravensdown site near Masterton.

About 20 people chained themselves to the gates of Ravensdown outside of Masterton in protest the importation of phosphorus from Moroccan-occupied land in West Sahara.

Protests were staged across the country on Monday by Extinction Rebellion and other climate and social justice groups, aiming to blockade Ravensdown and Ballance depots.

The peaceful protest outside the Masterton site of the fertiliser manufacturer on State Highway 2 lasted from 6.30am through to about 11am when nine of the protesters were arrested for trespassing.

All were released without charges and were trespassed from Ravensdown for two years.

The protesters said that they were there in “rage and aroha” for the Saharawi people in the West Africa region, which is under military occupation by Morocco.

“About 160,000 Saharawi people have been displaced by the conflict,” Wairarapa protesters said. 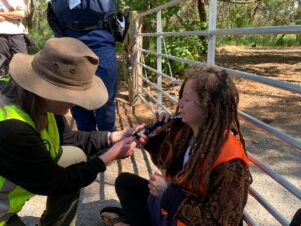 “Morocco extracts rock phosphate from the region, and New Zealand is the only remaining Western nation still purchasing the stolen Western Sahara phosphate.”

A Ravensdown representative said that “while acknowledging the right to protest, we have a responsibility to our farm owners so they can grow the food that nourishes the nation and earns new export dollars for the country”.

“We will continue to work with police so that we can safely get on with providing the essential service of nutrient supply in a vital growing season,” the spokeperson said.

Protester Rachael Andrews said that she was “here today because New Zealand is the last western nation buying phosphorus from West Sahara”.

“Morocco broke ceasefire on Friday; this is a gross human rights issue where they are exploiting the rights of indigenous people.” Andrews would like to see a transition from what she called “destructive” farming techniques to “regenerative farming practices”.

“The farmers aren’t to blame – this is what we’ve been doing for way too long,” Andrews said.

“Phosphate physically moves across the land, which is why stock exclusion from waterways and riparian planting is so important.”

“The phosphate that farmers are putting on is replacing what is taken away when we sell our grains, crops, milk, and meat. It’s all about creating nutrient balance. 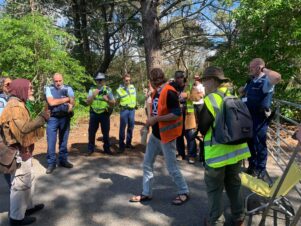 “Both Ravensdown and Ballance Agri-nutrients make up one-third of the mined rock demand from Moroccan-run Bou Craa Mine in the occupied territory and remain the two largest global purchasers followed by China and India,” protesters said.

Protesters said that “early this month the ship IVS Windsor came into Tauranga and Bluff carrying blood phosphate that is illegally mined in the Western Sahara”.

“The mine has no international recognition as a legitimate business, nor does any country officially recognise Morocco’s occupation or governance as lawful in the territory. Most of the benefits are kept in Moroccan accounts and benefit Moroccan workers.”

Wairarapa protesters said that if these companies failed to end the importation of ‘blood phosphate’ they wanted the government to step up and end it for them.
“To continue puts New Zealand’s international reputation into disrepute and is unacceptable.”

Wairarapa Federated Farmers president David Hayes said that this “is a very high-level, complicated issue, and we would say is it is more appropriate for it to be sorted out by the United Nations”.

If it was determined by international authorities that mining phosphate in the Western Sahara needed to change then that had to be considered.

Ministry of Foreign Affairs and Trade said “the importation of phosphate rock [from any source] is a commercial decision. However, the Government has encouraged New Zealand companies to look for alternative sources, and to continue to develop and invest in technology that would make importation from a range of sources more viable.” MFAT said that the government has “consistently made it clear to companies importing from Western Sahara that they must comply with international law and that they import at their own risk.

The leader of a pro-independence group in Western Sahara declared war on Friday against Morocco, shattering the three-decade-long ceasefire, and threatening a full-blown military conflict in the disputed desert territory in northwest Africa, according to Sahara Press Service.

The war declaration came just one day after Morocco launched a military operation in a buffer zone that is patrolled by United Nations, after accusing West Sahara pro-independence group the Polisario Front of blocking access into the neighbouring country of Mauritania.

Morocco has established a “security cordon in order to secure the flow of goods and people through”, a senior officer in the general staff in the Moroccan military said.