Century of tramping the Tararuas The Tararua Tramping Club marks its 100th anniversary this Wednesday, making it one of the oldest clubs in the country.

To celebrate, the club recreated its first tramp on Sunday, undertaken in 1919, from Johnston Hill to Mt Kaukau along Wellington’s scenic Northern Walkway.

Munn said the club’s first outing had been an inauspicious one, with two members of that first party getting lost in fog. Fortunately, it ended happily with the missing trampers being found.

Today the club is one of the largest in the country, some 700 members strong, and takes in people from all walks of life and all ages. What’s more, organised tramps have become a popular pursuit and tramping clubs have sprung up throughout the country.

“The Tararua Range is such a dominant feature of the lower North Island,” Munn said. 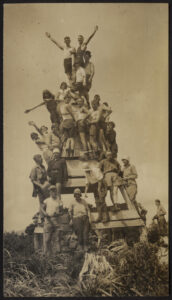 A 1931 photo of Tararua Tramping Club members with various other tramping clubs at the summit of Kapakapanui, behind Waikanae.
PHOTO/IAN BAINE COLLECTION

“It dominates our geography, our weather, our lifestyle and recreation – in that regard, little has changed over the last century.

“Perhaps that’s why the club has always been so attractive to people living in the lower North Island, and why the club remains in such good stead 100 years on from its inception.”

On Wednesday ‘Leading the Way’, a book chronicling the history of the Tararua Tramping Club will be launched at the SPCA Wellington Centre in Mount Victoria.

Written over a five-year period by Shaun Barnett and Chris Maclean, the book is already available in several book stores, including Paper Plus Masterton.

Barnett said the 364-page history seems to resonate with people both inside and outside the club.

“Initially we thought that it might have regional interest from Wellington and Wairarapa but there’s been retailers from as far as Wanaka that have bought copies.”

Maclean paid tribute to an earlier Wairarapa tramping organisation, Greytown’s Mt Hector Track Committee who were responsible for developing much of what is now known as the Southern Crossing.

“Essentially, the Tararua Tramping Club came along and picked up the baton and carried on the good work, finished the Southern Crossing and secured government funds to put huts along the way.

“But it was very much building on the example and energy of that Wairarapa committee who had done so much to lay the foundations for tramping in the Tararuas.”