In 1921, a group of Masterton sketch artists planned to start a group that would “promote the study and practise of fine arts in the Wairarapa district”.

These keen-eyed women would doubtlessly be pleased to know their vision is still being realised in Wairarapa – and their group is still going strong almost 100 years later.

The Masterton Art Club will be celebrating its centenary in May this year – marking its milestone birthday with an exhibition at Aratoi, as well as other events at its Victoria St premises.

The Aratoi exhibition, called “Now and Then”, will include work from both past and present club members, as well as an audio-visual presentation on the organisation’s expansive backstory – beginning with its founding as the original Masterton Amateur Sketch Club.

To help compile information for the audio-visual, the club engaged Masterton oral historian and archivist Greg Fowler, who has spent much of this year researching the club’s history, as well as connecting with the founding members’ descendants.

The club’s committee also plans to host an open day and high tea at its Victoria St clubrooms, where the club will appoint and honour Life Members. 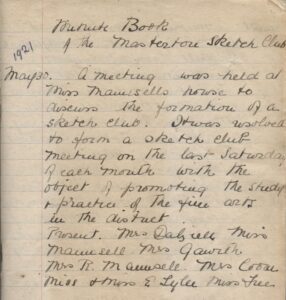 When the organisation was first formed back in the early 20th century, members held meetings at one another’s homes, did most of their work “en plain air” [outdoors], and held exhibitions at various municipal buildings.

These days, some things look different: the club has its own building, members exhibit in galleries all over the region, and advances in photography mean you can capture a landscape while referring to a smart phone screen.

However, the club’s goals have remained largely the same over 100 years – to provide a space where artists can pursue their passion and improve their craft in a supportive environment.

“It’s very impressive to have a club survive 100 years, especially in a small community like ours,” club secretary Sue Bates said.

“We believe the club has kept going because of the enthusiasm of the members.

“They have seen the need for a place where artists can connect with like-minded people, who can offer encouragement and constructive feedback.

“Social connection is definitely important, and covid-19 reminded us of that.”

The Masterton Art Club began life as the Masterton Amateur Sketch Club: beginning in May 1921 with an initial meeting, then becoming official the next month, when nine women met to form a committee.

The first elected club president was Eva Dalziell, who held the position until 1940, and it was agreed membership fees would be 2 pounds, 16 shillings.

Monthly meetings were held at members houses, with each member presenting a sketch for evaluation by an outside “critic” – failure to do so would result in a fine.

Critics were mostly art teachers recruited from the local schools, and were paid a fee of 3 pounds, 10 shillings for their time.

In 1940, sketch club members had begun to experiment with oil paints, so a public meeting was called to formally change the name of the organisation to the Masterton Art Club.

Despite World War II, the newly re-named club continued to meet and exhibit throughout 1940s: with club members serving overseas sending work back home to exhibit, and the committee beginning to fundraise for a new art gallery for Masterton.

Thanks to their efforts, the Wairarapa Arts Centre [now Aratoi] opened in 1969, with Masterton Art Club members among in first exhibitors.

Fowler said audio-visual narrator Mavis, a member of the club since the 1960s, had plenty of interesting anecdotes: including having to organise transport for rural members during the “car-less days” of the 70s, holding outdoor exhibitions at Henley Lake, and organising plein air painting field trips.

“They’d go to all kinds of places to paint – farms, people’s properties with big gardens, down the river,” Greg says.

“Mavis said it was wonderful being able to hear a stream while painting it, and seeing all its different colours in real life.”

These days, members meet at the club rooms to paint every Wednesday and Thursday, and organise other classes and workshops throughout the week: including printmaking, watercolour painting, and life drawing, and the occasional plein air session.

The Masterton Art Club hopes to connect with the family of Eric Gully, one of the original Sketch Club members, to get their permission to use his works in the audio-visual.