A talking portrait sounds like a fantasy scene straight out of Harry Potter or a 19th-century gothic horror novel – not something you’d find in little old Carterton.

This weekend, Carterton Events Centre will host the debut screening of Aotearoa Moving Portraits – a videography series capturing some of the most animated, diverse, and intriguing characters of Wairarapa.

The screening, part of Ka Pai Carterton’s Matariki programme, will feature a collection of interviews with some of the district’s best-known personalities: sharing stories of environmental and social activism, mental health, family history, and connection with the land – plus a few “local legends”.

Aotearoa Moving Portraits was the brainchild of filmmaker Sean Woollgar, who has spent the past year filming his first seven subjects – displayed in the style of an artistic portrait, reminiscent of the iconic paintings of CF Goldie and Gottfried Lindauer. 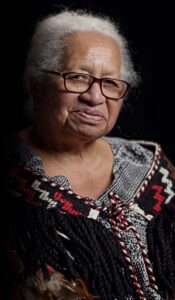 Frances Reiri-Smith is one of the subjects of Sean Woollgar’s Aotearoa Moving Portraits series – sharing stories about her Nana and Popo, her experience of almost being married to someone against her will, and some Carterton myths and legends.

Woollgar chose Carterton as the home base for the early stages of his project because of the colourful assortment of individuals he knew lived there.

Eventually, he hopes to take the project on the road – creating many more portraits and displaying them at museums, art galleries and community centres throughout Aotearoa.

Woollgar said the idea came about after his partner, whom he met in Britain, told him countless stories about her nana, Lorna, who grew up in New Zealand during World War II.

“I loved hearing these stories and asked if anyone had been documenting them for the family as her nana was in her 90s,” Woollgar said.

Woolgar got to film one interview with Lorna, before she died from a stroke a few months later.

“I was deeply saddened by her death – but also by the loss of all those stories which we didn’t manage to document.

“I edited together a piece about her saying goodbye to her fiancé at Wellington Harbour as he left to join the war in Italy – which played at her memorial service.

“Afterwards I had so many people come to me, saying I should interview their nana, or their uncle, who all had amazing stories. This was my lightbulb moment and Aotearoa Moving Portraits was born.

“I decided to start in Carterton – this is where I live, and I know there are fantastic stories from local people about the area and its history.”

Woollgar said it was important to capture and document stories “before they are lost, so they can be passed on to future generations”.

“There is so much we can learn from other people’s stories, especially from our kaumātua and elders. We value [our elders’] legacy and Aotearoa Moving Portraits will commit that legacy to film and, therefore, to posterity.

“People telling their stories is a pleasure to capture on film. The way their faces light up, it’s a huge kick.”

Not everything was smooth sailing for Woollgar, who said funding for the project was a constant struggle.

“This is an enormous project and will require a huge amount of time to complete.

“Ka Pai Carterton has been instrumental in co-ordinating shoots and finding the right people to interview.”

“It’s all about getting to know your neighbours and the history of the place we call home,” Grayson said.

Ka Pai Carterton had conducted a community survey in 2019, which pinned down the most prominent values among the town’s residents. 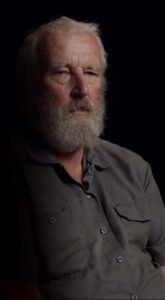 Reluctant hero Pat McLean talks about his involvement in conservation.

“One of the several inspirations that our community selected was identity: what it means to belong to Carterton,” Grayson said.

“We want to find out about the people who live in this land, the generational farmers, the mana whenua.

“We are all fiercely proud of the town we live in and are keen to highlight some of the people who are here, and invite others to engage.”

Grayson said that although the Carterton screening might not feature moving portraits lining the walls of a gallery, it is still Woollgar’s goal to achieve this.

The Carterton event will feature two portraits next to each other on a big screen – one will speak while the other awaits their turn to share with animated patience.

One of Woollgar’s subjects, Pat McLean, said he didn’t necessarily enjoy being thrust into the limelight – but was thankful for a platform to express his views on the environment.

“If they’re looking for interesting people in Carterton and they include me, then we really have a problem,” McLean said.

“I enjoyed the opportunity to express my views on conservation.”