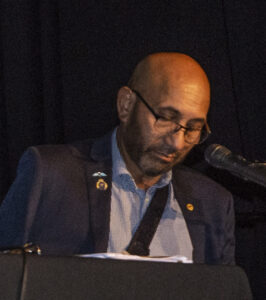 Ron Mark was the emcee at the event on Tuesday.

Emcee Ron Mark commented frequently throughout the night that Carterton residents faced a daunting task, with each candidate presenting distinct strengths and areas of expertise.

Williams said he would bring common sense and experience to the table.

Having started his first business at 23 years old, he had gone on to spend 21 years in local government, including three terms as mayor of Otorohanga.

“My life has been about practice, not theory.”

Osborne said one of the things he liked most about Carterton was the level of community engagement.

However, he felt there could be a distance between the council and the public. If elected, he proposed to stand at the Carterton Farmers Market every four weeks to keep people informed.

Osborne had been a regular presence at council meetings.

“Over the last 10 years I’d say I’m the person who has most spoken at the public forums.”

Pittams said he had until recently made the daily commute to Wellington.

“A few months ago, I decided that was enough, and after 43 years in government, I’m now devoting my attention up here instead, and getting a lot of stuff done.”

Pittams’ work in central government meant he knew the intricacies of policy creation, and as a social scientist and researcher, he knew how to ask probing questions and hold the administration to account.

Q1: How would you describe your leadership style and who is your role model?

Osborne said he liked to lead with other people in mind.

“What I try to do is ensure the people around me are able to complete those things. I’m not there for the accolades, I’m there to serve.”

He cited General Eisenhower and Mahatma Gandhi as role models, but said that more locally, councillor Rob Stockley had done an exemplary job.

“As a leader you need to respect people’s abilities and what they can do.”

His role model was former mayor of Carterton and Wairarapa MP Georgina Beyer – whom he had given a kidney.

Williams said that as a leader he was inclusive, positive, and enthusiastic.

“Everyone that knows me knows that my cup is always bubbling over rather than half empty.”

“He was no-nonsense, straight-up, proud, passionate, and loyal, and they are all qualities that I really admire in anybody.”

Q2: Coming in halfway through a term presents its own challenges. How will you go about joining an already formed council?

Pittams said that anyone joining an existing team had to do their homework.

“There’s a saying in Parliament … which is for a new parliamentarian to spend a first little bit of time breathing through your nose. In other words, keep your mouth shut, listen, and understand how things get done.”

However, Pittams said that the successful candidate also needed to show strength. To his knowledge, the council was going through a phase of conflict.

“My understanding is that it has fractured into groups. It’s going to be really important for anyone coming in to not play that game.”

He said the successful candidate would need to support the mayor to provide strong leadership and break down internal divisions.

Williams aimed to make a positive impact in council straight away and said his experience in local government would prepare him to do this.

“I don’t try to embarrass people or ridicule people. I try to work with what I’ve got in order to get the results I know people are seeking.”

Osborne positioned himself in the centre of the other candidates.

“In terms of coming into the team, there’s a tricky balance there between keeping your mouth shut but contributing where you can.”

His 25 years working as an IT contractor had taught him how to be productive from day one, and he was already familiar with council processes through his various submissions on long term and annual plans.

“I’m here for some issues, and I will speak up when those issues are raised, and then I will shut my mouth when they are not.”

Q3: If elected, what would you most like to be involved in as councillor?

The three candidates each had distinct areas of interest.

Williams said he was interested in the process of appointing a new chief executive.

“It’s not often you get the opportunity to choose the person who is going to help the council drive the future and not defend the past.”

Osborne said that although “it’s probably not the sexiest area of what the council does”, he would like to be involved in audit and risk.

He said that it was an under-utilised area that was often used as a box-ticking exercise rather than an effective management tool.

Infrastructure was an area that appealed to Pittams.

“The council is currently running a number of fairly major infrastructure projects. That ugly clock tower down the road is a good example…”

Pittams said that some projects had run well over budget, and this could affect council’s ability to undertake future projects.

Q4: How much should the Long Term Plan be informed by climate change considerations, and why?

He said that when he had first moved to Carterton, the Kaipaitangata had been the primary source of water, with the bores as a secondary source. Those sources had since completely switched around.

He said that council needed to spend money on prevention now, rather than waiting until the full effects of climate change were felt.

Pittams shared a similar story of change within the region.

“When we first came here, my eight-year-old son and his dog Blade could walk around on the animal water troughs because the ice was that thick in the middle of winter. Have you noticed it doesn’t ice over anymore?”

Williams argued that central government should be leading the way on climate change.

“I find it ludicrous that individual councils are responsible for planning, consultation, consents, mitigation, and infrastructure to protect against what surely is an issue of national importance.”

He said that while climate change should be integrated into every discussion, it needed to be weighed up alongside the other forms of well-being: social, cultural, and economic.

Q5: What do you consider to be the most important challenges facing the Carterton District over the next 10 to 20 years?

“For our local economy and our employers and businesses to power the economy, you need access to skilled staff.”

His involvement in Wairarapa Youth 2 Work sought to address these shortages.

Water and growth management were Williams’ other main concerns.

“The council has to be mindful to keep looking over its shoulder to make sure existing assets and facilities are maintained at the same level that infrastructure is going to be introduced.”

“The amount of new growth is just astonishing,” Pittams said.

He questioned whether infrastructure projects could keep up with forecast growth and said that council needed to address the district’s transport issues.

Osborne made it clear that climate change was his greatest concern, alongside issues like rates affordability, water, and growth.

Osborne questioned whether Carterton was even the right place for population growth, and if so, by how much.

Voting closes at noon on April 30.