Call for change after crashes A Tauweru resident is calling for a speed limit reduction on Masterton-Castlepoint Rd after a serious crash on Wednesday morning. PHOTOS/SUPPLIED

A witness living near one of the crash sites says change must happen now to avoid deaths.

The driver of a logging truck was in a moderate-to-serious condition after crashing into the side of a one-lane bridge across the Tauweru River on Wednesday morning. 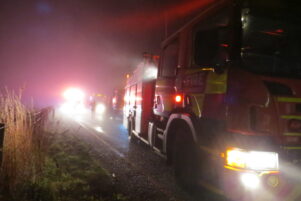 The truck crashed into the bridge 13km east of Masterton on the Masterton-Castlepoint Rd at about 6.10am.

The road was closed for several hours after the crash.

Wellington Free Ambulance transported the driver to Wairarapa Hospital before a Life Flight helicopter flew him to Wellington Hospital.

A Fire and Emergency spokesperson said the driver’s legs had been stuck in the vehicle and the Masterton firefighters had to remove him.

“[Crews] were there for a reasonable amount of time extricating the person from the vehicle.”

Life Flight crew member Colin Larsen said the helicopter had been unable to land at the scene due to fog.

By Wednesday afternoon, the patient was in a stable condition in the Wellington Hospital emergency department.

A Tauweru resident had heard the crash and was one of the first people on the scene.

The resident said he had spoken with Masterton District Council about the area’s speed limit and road layout.

“We’ve been on to them for ages trying to lower the speed limit.”

He said the speed limit of 100kmh was too fast for the area, and logging trucks had crashed frequently on the same stretch of road.

“We want it down to 50 or 60, especially where the kids are crossing the road. There have been constant problems with trucks flying through there.”

The resident said the layout of the road was illogical because drivers coming into Masterton did not have enough time after turning a corner to give way before the
one-lane bridge.

“Thankfully, today it was not a car, because if it was a car, the person would be dead.”

In 2011, a Tauweru farmer had died just west of Tauweru after striking a bank while driving his ute. He had not been wearing a seatbelt and died at the scene.

The second crash on Wednesday happened at about 6.40am outside Tauherenikau Racecourse, 4km east of Featherston.

A Fire and Emergency spokesperson said the driver of the car had reported icy conditions on the road.

“The car had gone into a ditch due to black ice in the area.”

Featherston fire chief Colin McKenna said the Tauherenikau Bridge was “quite icy” at the time.

The car was extensively damaged.

WFA transported the driver from Tauherenikau to the emergency department at Wairarapa Hospital.

However, he also said many of Wairarapa’s rural roads were not designed for 100kmh speeds.

“It’s not rocket science to understand that under these conditions, drivers must reduce their speeds.

Pauling said every winter brought sunstrike in the mornings and evenings, and icy roads could create black ice conditions and slippery surfaces after heavy rain.

“These conditions absolutely require us to slow down our usual speeds. Speed determines the outcomes if a crash occurs.”

Pauling said shaded areas on bends and bridges were likely to be icy. He advised drivers to brake well before corners.