Imogen van der Raaij one day hopes to do a PhD in stem cell research at Stanford University, California. PHOTOS/SUPPLIED

Few young people can say they have handled plant DNA, operated robots destined for space exploration, visited the headquarters of Microsoft, a NASA campus, and met the head honcho of the world’s largest live streaming website.

This is exactly how Matahiwi teenager Imogen van der Raaij spent her Term 1 school holidays – inspiring her to investigate studying at a prestigious American university.

Imogen, in her final year at Makoura College, was one of 12 students from the Wellington region chosen by the Innovative Young Minds programme for a tour of Silicon Valley, California – renowned for its numerous high-tech companies and innovative start-up businesses.

IYM, a partnership between Hutt City Council and Rotary, is dedicated to fostering a passion for the sciences and encouraging young women to explore careers in science, technology, engineering, mathematics and manufacturing – and organised the trip to open New Zealand girls’ minds to the international possibilities the STEMM sector holds.

While in the US, Imogen and the Wellington students visited a range of companies and training institutions known for their STEMM prowess, and met trailblazers whose achievements in computer science, robotics, biotechnology and aerospace engineering had propelled them to worldwide success.

Afterwards, Imogen returned to Masterton with a copy of a Dwight D Eisenhower speech in her luggage, several new friends, and the determination to take her future STEMM career to the next level – to do a PhD in stem cell research at Stanford University, California.

“I knew I wanted to do something with science and stem cell research in the future, but I wasn’t sure how it was going to work out – it didn’t feel set in stone. 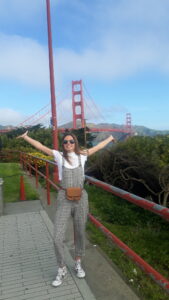 “But now I’ve been to Silicon Valley and seen what’s actually possible [for women in science], I feel loads more confident and motivated to go for the job I wanted.

“The people we met told us there will be challenges and setbacks, but if we want this career, we’ll overcome them.”

Imogen, along with 11 other young scientists and three IYM chaperones, left for California on April 7, and had barely recovered from the 12-hour flight when their adventure began.

The first item on their itinerary was a trip to The Harker School – a private preparatory school in San Jose, renowned for its hands-on science and technology programme which, at the time, was hosting a STEMM research symposium.

There, the girls were treated to seminars from scientists working at the forefront of major developments – from working on innovative solutions for climate change, to researching stem cell treatment to cure Alzheimer’s.

The symposium also included a STEMM Innovation Challenge, with a US$5000 grant presented by scientist and Harker alumna Surbhi Sana, who had developed a device to detect ovarian cancer at the earliest stages.

The girls returned to The Harker School later in the trip, where they got to meet the students and participate in their science classes.

A big thrill for Imogen was getting to partake in a biotech experiment, where she was able to isolate several strands of DNA in leaves.

“They have all this amazing equipment and huge research labs.

“We actually met a young guy who was probably Year 10, and he was doing a project on using infra-red to detect drunk drivers.

“The kids were all so smart, but really chilled out and nice.”

More hands-on science followed with a trip to Notre Dame High School, where the girls were introduced to the school’s all-female robotics team, the Janksters, and had a go at operating some of their creations.

The Janksters, fresh from an international robotics competition, had created the prototype for a robot, “shaped kind of like an arcade machine”, with the ability to transport cargo in deep space – which Imogen turned out to be “pretty skilled” at driving.

The space theme continued with a trip to Singularity University on the NASA campus, where the Kiwis met a project team of professors and students working on 3D printers to be used in a spacecraft.

This was followed by a visit to the head offices of computer and gaming giants Microsoft and Nvidia – and a chance to rub shoulders with technicians creating everything from solar-powered clothing, to virtual reality gaming headsets, to driverless cars.

One of the highlights for Imogen was meeting three New Zealand women, now based in Silicon Valley, whose technical mastery and business acumen landed them at the top of the corporate ladder: Victoria Ransom, from Bulls, creator of social marketing application Wildlife Interactive; Aucklander Dr Privahini Bradoo, founder of e-waste recycling company BlueOak Resources; and Sara Clemens, originally from Napier, now chief operating officer of Twitch, the world’s largest streaming platform for gamers.

Now back in Masterton, Imogen looks forward to studying microbiology at Otago University next year – after which she hopes to apply to Stanford University’s Institute for Stem Cell Biology and Regenerative Medicine.