Gus Borren poses a threat with bat and ball for United. PHOTOS/FILE

Two weeks ago, the first day of the two-day match was abandoned before the start because of rain, meaning that today’s second day will be played as a one innings game.

An extra 30 minutes will be added to make up for some of the time lost on the first day, so there will be a minimum of 108 overs in the day’s play.

Unlike a one-day game, there are no limits on how many overs a bowler can bowl, and there are no fielding restrictions.

Teams can bat for as long as they like, and it could take a bold declaration to push for a victory.

If there is no definite winner, the result will be decided by bonus points, based on the Furlong Cup points structure, which could suit the team bowling first.

Both captains are intent on pushing for a result, with the winners locking away Wairarapa’s premier trophy, the Bidwill Cup, currently held by Red Star, and progress to a two-day semifinal next month against Whanganui Marist.

United captain Jared van Deventer said they would approach the game the same way as a two-day game.

“We’ve got to get a score on the board because the winner is going to be determined on one inning, and you’ve still got to play good cricket,” said the veteran top-order batter.

“The good thing is you don’t have to motivate the team because they’re up for it. These local derby games seem to bring out the best in everyone, so everyone is chomping at the bit and raring to go,

“We’re keen to have another crack at Red Star and see if we can make it two from two [after winning their T20 clash], and the Bidwill Cup is a little bit of added incentive, and it would be nice to take it off Red Star.” 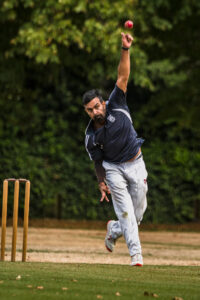 Roshan Sugathan’s left-arm spin could be vital for Red Star.

“That works well this week because obviously without Siggy, we are a bit light on bowling, and it comes down a lot to me, Sean, and Roshan. If someone gets on a roll, they could bowl all day if they want,” Hook said.

Van Deventer is conscious of the threats posed by Red Star, especially in the traditional format.

“Red Star are a good team, and although a couple of their players are out, they have some good batting, and they have Hooky who can always be the difference, so we’ve got our work cut out for us. But we’re feeling pretty confident.”

United won’t have Seth Rance, who took six wickets [4-52 and 2-53] on his return to first-class cricket for the Central Stags against Wellington during the week and Wairarapa representative cricket. However, they will have left-arm spinner Quinn Childs, all-rounder Gus Borren, and top-order batter John McKenzie back from university to boost their ranks.