But is it from the Heartland? Ma’a Nonu, with ball, in action for East Coast against Buller. PHOTOS/GETTY IMAGES

A couple of years ago I penned an article questioning whether the Heartland Championship is really grass roots rugby, or is it just another development stepping stone for the bigger National Provincial Championship unions?

Happenings over the past couple of weeks suggest to me that the competition, which involves rural provinces surrounding smaller urban areas, is moving further and further away from the true Heartland premise. 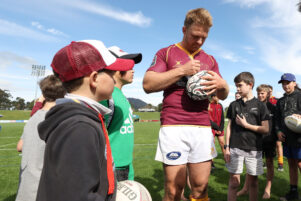 All Black Sam Cane signs autographs after his cameo for King Country.

Firstly, All Black captain Sam Cane needed some game time, and because his Bay of Plenty team weren’t playing, a quickly arranged stint was agreed with King Country. Cane had a valuable 40 minutes in the maroon jersey before he jetted off to join the All Blacks in Washington DC.

Not surprisingly, there were grizzles from King Country’s opponents Whanganui before the game that Cane could make such a significant impact that they could be denied a win or vital bonus points – a valid argument. But in the end his involvement had little impact as Whanganui romped to a 48-13 victory.

Then last weekend, former All Black midfielder Ma’a Nonu answered a call from former All Black wing and now coach of Ngati Porou East Coast Hosea Gear, which led to the 39-year-old making a cameo appearance for the sky blues in their first win in 54 games and eight years, a 50-26 defeat of Buller.

The 103-test All Black took the field for the last 20 minutes at Ruatoria, along with Gear, and former Samoan international flanker Faifili Levave, with East Coast already having wrapped up victory with a 43-12 lead, so they had little impact on the outcome.

In some ways I believe it’s great that these guys are giving something back to the game, but the reality is that Nonu’s and Levave’s only connection with East Coast is their relationship with their former Hurricanes’ teammate Gear.

It does make for a potential marketer’s dream though in two-and-a-half weeks when Farriers Wairarapa-Bush host East Coast in the final round of the Heartland Championship. The thought of having three former All Blacks on the field – Nonu and Gear for the Coast, and Zac Guildford for Wai-Bush could be worth the price of admission alone.

But is it true to the concept of Heartland rugby?

It is however a more acceptable proposition than that of Whanganui, who proudly espoused the virtues of their latest recruit, Canterbury utility forward Mathew Taula-Fili, who made an immediate impact when he came on in the 48th minute and scored a try in the comeback win over Horowhenua-Kapiti.

Now that typifies much of what is wrong with Heartland Rugby – a player coming out of a major union’s development programme and taking a spot that could be filled by a local club player.

Then again, the integrity of the competition has been questionable for many seasons, mainly brought about by the inclusion of import players, and the clever placement by the bigger NPC provinces into Heartland provinces of development or fringe players, who are then classified as “local” players.

In the NZ Rugby regulations, “Local Player” means a player who [a] is registered with a club competing in a competition conducted under the control and jurisdiction of that provincial union”.

So, a “local player” only has to be registered with the union before an agreed cut-off date, but it does not state anything about that player having to play club rugby in that province.

That leads to clever administrators stockpiling players from outside their provinces to the detriment of the development and promotion of their own club players.

What connection do those players have with the local supporters and community?

What pride do they gain from representing another union?

That’s where I believe Wai-Bush have got it right, where a homegrown team takes the field. There are “imports”, but they are all players of origin having been raised here, they’re all proud to wear the green and red, and the supporters have pretty much bought into it.

The likelihood of that becoming the norm though is remote with any change requiring unanimity between the Heartland provinces, and there are too many intent on winning at all costs rather than doing what is best for Heartland Rugby.

Is it time then for NZ Rugby to put the Heartland back into Heartland Rugby, so that it truly reflects the strength of rugby in the provinces, and not the clever recruiting skills of administrators and coaches?

Farriers Wairarapa-Bush’s away game against King Country on Saturday will now be played in Taupo.

The Heartlands Championship clash was originally scheduled for Rugby Park, Te Kuiti, but with the southern Waikato town still in covid-19 level 3 lockdown, a change of venue was necessary.

The Lochore-Meads Memorial Scroll, held by Wai-Bush, will also be up for grabs in the game that will kick off at 2.30pm at Owen Delaney Park, Taupo.