Two of the three buildings destroyed in a suspicious fire last week have now been demolished.

Company Quality Demolition and Contracting volunteered to remove the buildings at 26 and 28 High St North on Friday evening, working into the night to complete the demolition and make the site safe.

Although the fire also damaged the building at 34 High St North, it was not demolished.

Carterton Mayor Greg Lang the act was an example of locals stepping up for the community. 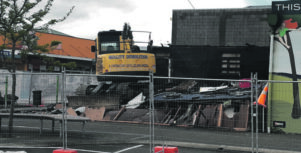 “I’d like to thank Shane and the team at Quality for helping out at such short notice.”

High St businesses were collecting funds and helping those impacted by the fire, while others had pledged more than $6500 over the weekend to an online fundraising campaign.

Fire and Emergency Wellington district manager Nick Pyatt previously said the building was well alight when the Carterton Fire Brigade arrived at the scene but was under control within an hour.

There were no reported injuries.

“We’ve been living in New Zealand for the last eight years, and we’ve had the store for two,” she said.

“We’ve been saving money all that time for this business. Now, eight years of hard work is gone in eight hours.”