Building a bridge to the future for a village in Ethiopia Mauriceville farmers Alan Stuart, right, and Jim Weston celebrate the completion of the new bridge with the residents of Baregota in Ethiopia. PHOTOS/SUPPLIED

Mauriceville farmer Alan Stuart has fulfilled a promise made two years ago, to build a bridge in the Ethiopian village of Baregota.

An article in NZ Farmer about a visit to Ethiopia by Ric Foxley, founder of the charity Bricks For Life, got Alan Stuart interested in the idea of aid work in Ethiopia.

He contacted Foxley, who organised a visit to Stuart’s Mauriceville farm by Ethiopian Amlaku Teshome, from the village of Baregota. That resulted in a return visit to Baregota in 2017 with Foxley.

The village is divided by a small river in a ravine – one side featuring a steep scramble up a bank, a problem for heavily-laden people and donkeys, particularly in the rainy season when the river can be two metres deep. 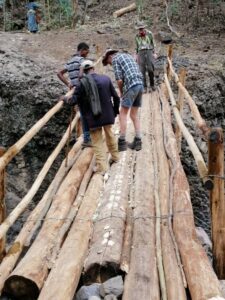 The people of Baregota identified a pressing need for a bridge to traverse this ravine, to carry goods to market daily, as lives had been lost in its crossing.

Stuart pledged that if a planned $100,000 suspension bridge didn’t go ahead, he would build a simple but sturdy bridge for $5000.

This year, accompanied by his Mauriceville neighbour, Jim Weston, Stuart returned to build the bridge.

“There were plenty of challenges and as much prep work prior to travel as could be done was paramount,” he said.

“Among these were the availability of equipment and gear, which proved difficult, though we made do with what was available.”

Most of the tools, and hardware were purchased in the huge Merkato market in Addis Ababa, where Teshome was able to provide essential assistance with the haggling process.

“Purchases included a roll of No 8 wire, which I thought was mild steel, but when we got to Baregota, we found it to be incredibly tough, hi-tensile steel grade wire. Wire cutters wouldn’t touch it, and bending it was a mission in itself.

“We couldn’t buy staples, so I had to cut and shape staples out of this steel wire, and sharpen them with a file.”

The pair few to the city of Lalibela next morning, and made the eight kilometre foot trek to Baregota village on a very hot day, arriving to a warm welcome.

Next day, we surveyed the site, looked at trees, and talked it all over with the community people.

“After deciding a plan of attack, Jim cut down the first tree, and so began the project,” Stuart said. A stonemason at work on
material for the bridge.

“I had originally planned on splitting a large gum tree in half, using the two flat sides as the deck, and then just putting on railings, but this plan was discarded when we couldn’t find a tree big and straight-grained enough for the purpose.

“So, we decided to use seven smaller diameter gums, pulled tightly together, and to lay saplings and river metal in the corrugations formed between the logs.”

The trees needed to be 15m long and dead straight and were hard to find. The span was 10m, and height off the riverbed was approximately 10 metres.

“The width of the bridge was settled at 2m, wide enough for two loaded donkeys to pass in the middle!”

Stuart said up to 150 villagers provided help with the work – “both physical and verbal”.

A large concrete and stone-block buttress wall had to be constructed on one side, for which a stone mason was employed, with the locals cutting the square stone blocks from volcanic river-stone.

“They were huge stones, all carried by strong shoulders and split with steel hammers. An amazing feat, and a sight to behold.

“The women were flat-out carrying shingle and making and carrying concrete to the site. No wheelbarrows, all done in bags on backs.” A side view of the bridge, showing the rugged terrain.

The logs, some weighing up to three tonnes, were dragged 500m across rough, rock strewn-terrain and assembled above the site.

“The next big challenge was to move the big logs across the gap. With a lot of painstaking pulling and lifting, levering and sliding, and lots of noise to help, we got them across

“To have dropped one in the river would have been a major disaster. The steel wire was a great asset to pull the logs together tightly, and to tie them down to the rock buttress.

“The safety rails were the last to go on, and then it was party time.”

Stuart described the farewells the next day as “both joyful and tearful at which locals expressed their appreciation for their new asset to the village”.

“We won’t ever forget those two weeks.”

The final cost is estimated at $3200 – including paid labour and materials.

For more information on Bricks For Life, go to: bricks.org.nz