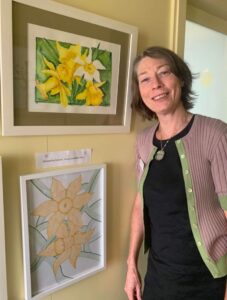 Bronwyn Locke, newly appointed centre manager for the Wairarapa Centre of the Cancer Society, looks forward to making a difference in her home community of Wairarapa. PHOTO/ERIN KAVANAGH-HALL

Her most recent role, however, brings her back to her hometown: ensuring Wairarapa people can “live and live well” with cancer.

As she put it: “you don’t have to travel the world to find shining stars.” Or to be a shining star.

Bronwyn is the new centre manager at the Wairarapa Centre of the New Zealand Cancer Society – working at Margaret Chittick House on Te Ore Ore Road which, as a youngster, she walked past every day on her way to school.

A qualified nurse and midwife, Bronwyn is a veteran of the health and community development sectors, at home and overseas.

In her almost four decades long career, she had worked as an ICU nurse in Saudi Arabia, as a midwife with Medecins Sans Frontieres (Doctors Without Borders) in the Middle East and Africa and travelled throughout the African continent to work alongside obstetric care professionals.

In New Zealand, she had worked on the frontline and in government, specialising in areas such as medication access, Pasifika health, and vaccination.

Bronwyn is once again at the coalface of community health at the Cancer Society – making sure people living with cancer can access counselling and other support, information, and transport to appointments.

She hoped her breadth of experience will add value to the community in which she grew up and make in a difference within her own backyard.

“I met some amazing people overseas – but there are plenty of shining stars here in Wairarapa, including the people who get up every day and live with cancer,” Bronwyn said.

“There are needs to be met in our own neighbourhood. There are people who living alone with no family, no transport to get to their treatments, and no idea how the system works – we need to make sure they can break down those barriers.

“Healthcare should be accessible to all – no matter who or where you are.”

Bronwyn was born at the old maternity hospital in Masterton (right across the road from her new workplace), and attended Lansdowne School, Hiona Intermediate, and Makoura College.

She trained as a nurse through Manawatu Polytech, and worked in hospitals throughout the North Island, eventually specialising in intensive care.

Her first experience working overseas was in Saudi Arabia, where she worked for a year in a private hospital.

Health care in the Saudi public system, she said, was rudimentary – and money could mean the difference between life and death.

“It gave me a snapshot into how differently some parts of the world lived – and what access to health care actually looks like.

“We lived in gated compounds and wore veils every time we stepped outside. We couldn’t go out at night, and there were areas we couldn’t go without an escort.

“It was definitely eye-opening.”

Encouraged by her late mum, a clerk at the former Masterton Hospital’s maternity ward, Bronwyn embarked on a Bachelor of Science in Midwifery from the Auckland University of Technology.

She graduated in 1997 and worked as an independent midwife in Auckland, before joining with Medecins Sans Frontieres (MSF) in 2003.

Her first post with MSF took her to the Bamiyan Province in Afghanistan’s central highlands – a remote area whose heritage sites had been destroyed by the Taliban and was occupied by international armed forces.

Afghanistan had one of the highest maternal mortality rates in the world, exacerbated by women being cut off from medical care due to decades of conflict.

As her colleagues’ families forbid them to work at night, Bronwyn was often called to the hospital in the early hours of the morning.

“Someone from MSF would knock on my door and 2am, and say ‘Miss Bronwyn, the hospital rang.’

“I’d take my massive satellite phone, which looked like something out of MASH, and drive down to hospital.

“Usually, they’d call me when there was a problem – and I didn’t always have a doctor to refer to.

“We work alongside the Red Cross and there were times when we did have to involve a surgeon to do a C-section. But that was something we never did lightly.

“Women were coming from rural areas, travelling for hours – and we’d be sending them away to recover from major surgery.”

Many of her clients didn’t speak English – so she is eternally grateful to her interpreter, a man named Raziq.

“He’d be behind a screen, asking the women about their medical history, how long they’d been in labour, if they’d other children – and then translating everything.

“It could be stressful, but we got on with it. I was working in a different culture but, when you pare it back, you’re dealing with the universal experience of giving birth.

“Your medical knowledge kicks in, and you give the person the help they need.”

After six months in Afghanistan, Bronwyn returned to New Zealand and worked as a midwife in Hawke’s Bay – before once again signing up with MSF in 2006.

She travelled to the Democratic Republic of the Congo (DRC), where she worked in a small village called Ankoro on the Congo River – surrounded by jungle and mainly accessible by boat.

She worked with five Congolese midwives, whom she describes as “absolutely amazing”.

“They would be delivering babies at 3am, in the pitch-black night, by the light of a Tilley lamp.

“They knew their stuff.”

The DRC was then in the grip of the second Congo War, and militia groups made their presence known.

Bronwyn remembers an incident where she and other MSF staff were called to a nearby village which had been attacked by militia, and its women sexually assaulted.

When staff arrived, the village had been razed to the ground, and only a few terrified women and children remained.

“We were able to give them HIV prophylaxis [to prevent infection after potential exposure] and tetanus injections.

“It was hard – it was shocking for me that people would use women in that way.

“But it helped to know we could provide our skills to meet their need.”

Bronwyn then headed to Sydney, where she stepped into the role of International Women’s Adviser for MSF’s French division.

She continued criss-crossing the globe, travelling to Nigeria, Sudan, Congo-Brazaville, Laos and Chechnya (among many others) to assist medical professionals with improving maternal health.

She returned to New Zealand in 2011, where she took on roles at Family Planning, Pharmac and the Ministry of Foreign Affairs and Trade, as a health adviser supporting Pacific development.

Most recently, she worked at Ministry of Health, part of a team co-ordinating the covid-19 vaccine rollout to Pacific nations, which she found extremely rewarding.

She was in the thick of the vaccine rollout last year when husband Nick encouraged her to apply for the Cancer Society role.

It was, she said, an opportunity to do “something more tangible”.

“I wanted to wake up in the morning, kick off the covers, and know I’m going to go to work and actually see the difference I was making.”

For Bronwyn, part of making a difference is connecting people from all walks of life: from people in rural areas struggling to get to their chemotherapy appointments, to MPs and government departments while advocating for medication access and smoke-free policies.

As centre manager, she hoped to raise the profile of the Wairarapa Cancer Society and its work – as there is still confusion as to where it fits “on the cancer spectrum”.

“For example, we’re not a hospice provider. People don’t come to us when they’re at the end of their life.

“A big part of our role is supporting people as they live with cancer and helping them live well.

Bronwyn said she is most grateful for her “amazing little team” of staff, the hundreds of volunteers – the “backbone” of the organisation – and her family, whom she describes as “her biggest fan base.”