Barriers at the footbridge at the South Featherston entrance of Lake Wairarapa. PHOTOS/SUPPLIED 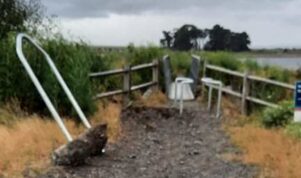 The barrier removed from it’s position.

The footbridge at Lake Wairarapa Reserve had new metal barriers concreted in at the entrance on Christmas Eve, but they were pulled out on the weekend.

Featherston resident Owen Dance said he walked his dog most afternoons down at the lake to the left of the motor camp area.

“I was at the lake and saw that someone had hauled the new vehicle barriers at the footbridge out by their foundations,” Dance said.

“Maybe someone got a new ute for Christmas and wanted to show off what it could do, but it is vandalism and unwelcome.”

Dance thought the barriers were installed to stop motorcycles getting across the stream, and people riding on the other side.

But the stream is shallow, and the bikes can get across that way. There has been increasing tension between those wanting to ride bikes on the track [that has been there for more than 25 years] and the increased interest from the Featherston community in restoring the natural environment at this section of the lake.

Last Christmas, a resident found that a large digger had widened the motorbike track.

They objected because it was cutting across the walking trail and had damaged the area.

At the time, South Wairarapa District Council confirmed it would work with the bike track users on improvements, but someone had gone and done what they wanted without working with the council. A track user said the widening of it had made riding safer for his son.

Dance said the two activities could go together but regenerating the environment in the area was more important.

“Trail biking and wetlands restoration and planting don’t go together, and the environmental improvements are the priority for the majority,” he said.

He said there were plenty of other spaces for the dirt bikes to be ridden and raced for recreation.

The new barriers limiting access across the stream sparked comments in the Facebook group, ‘You know you’re from Featherston When…” that the Greater Wellington Regional Council was, without consultation, restricting access to waterways.

“GWRC is taking over our water access rights, and this is angering a lot of people, I’m one of them, and I am disabled,” Aileen Saba said.

Other members of the group said the barriers looked like a gate, and many were asking why they were there. New sign at South Featherston Rd at the gates shutting cars out of the beach.

Access to Tauherenikau River from the end of South Featherston Rd was gated off by the regional council because of persistent rubbish dumping.

The area shut off was where vehicles could drive down on to the river.

“Unfortunately, we’ve had repeated instances of people dumping their rubbish out here; it’s not a pretty sight. Foot access is still available, but we understand this doesn’t work for people with disabilities,” a regional council spokesperson said.

“Until a better solution is found, this is our only choice in regard to stopping persistent rubbish dumpers. We’re in the process of arranging a ‘no rubbish dumping’ sign for the site.”

In response to the suddenly installed gates, Featherston Community Board chairman Mark Shepherd said he wanted better communication from the regional council about decisions restricting access about public waterways.

This week, he said he was annoyed at the vandalism of the barriers to the footbridge at the lake and a compromise between environmentalists and traditional bike track users needed to be found.

“A few people are coming down on their motorbikes and not being responsible and ruining it for everyone,” Shepherd said.

“These tensions are going to rise, but there needs to be a compromise found between the two forms of recreation, that is walkers and bikers and also the interest the iwi has in restoring the moana.”

South Wairarapa Mayor Alex Beijen said he had asked the regional council to get the Tauherenikau River gates opened before Christmas.