Brewery keeping Mangatainoka on the map, and visitors coming Trucks on display at the Tui Brewery at a previous Tui Truck Stop Show and Shine. PHOTO/FILE

It’s 130 years since traveller Henry Wagstaff stopped for a cup of tea by the Mangatainoka River and decided to stay and build a brewery.

Locals still count their blessings he built a brewery and not a tea house.

As many small New Zealand towns struggle to survive – the factories and industries they grew up around long gone – Mangatainoka can still draw up to 40,000 visitors a year. The visitors from around New Zealand and overseas are spending their money on beer, food and souvenirs, helping to create employment, and even helping to keep the village beautiful through a new seeding nursery and tree planting programme.

And it’s all thanks to Henry Wagstaff, his cup of tea, and the brewery he built that has turned into something of a national icon.

Rosie Rogers, who runs the visitor experience at Tui with her husband Nick, says almost every New Zealander who grew up in the 20th century has a Tui memory.

“For me it’s about sitting around on the family farm and having a Tui at the end of a hard day,” she says.

For others it’s the memory of a beer at the clubrooms or the beach, the infamous Yeah Right billboards, the Tui girls. 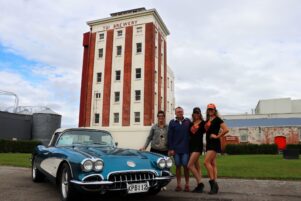 Jo Jackson and her husband Trevor were delighted to win the Star of the Show award with their 1959 Corvette at Tui Brewery’s American Car Day in April, 2018.
PHOTO/SAMANTHA OLIVE PHOTOGRAPHY

Whatever it is, Tui has a place in New Zealanders’ hearts and minds, Rosie says. And that’s what they’re keeping alive at Mangatainoka.

The visitor experience at the brewery started to come to life in 2005 – before that there was just a ‘hole-in-the-wall’ that sold crate bottles of beer and drew a few hundred people a year.

Today visitors can still get a photo in front of the seven-storey tower – built in 1931 so that brewers could use gravity to turn malt into beer, and now a heritage-listed building.

And the brewery also now has a new brewhouse [opened in 2016], a garden bar, a restaurant, a souvenir shop, a conference and events centre, twice-daily brewery tours, and a museum where visitors can still reminisce over the Tui girls, Tui billboards, and 130 years of other Tui tales and memorabilia.

They’ve also been able to pull in crowds over the years with original events such as a golf tournament where the final fairway was over the fence to the brewery, a team adventure race carrying empty kegs through the countryside, a force back tournament, and Hurricanes rugby games in what is usually a grazing paddock. About 5000 people packed the ‘grounds’ for the latest Hurricanes match against the Blues in early February.

They also now have monthly Mangatainoka Motors car shows, which have brought 875 vehicles and 2200 people through the brewery gates last year.

And they’ve been rolling out the welcome mat to motor homes and camper vans: tidying up the Mangatainoka Reserve across the road from the brewery, providing a water refilling station and a dump station, and planting native trees to provide shelter and protect the river bank.

They’ve even been inviting the campers to get involved in planting the reserve, offering anyone staying overnight from June to September the opportunity to plant a tree and get a drink for free. The brewery now has its own nursery to grow native seedlings for the planting programme, so visitors are given a seedling from the nursery, along with a spade, and when they return the spade they can claim a free drink.

Rosie says they launched the programme to appeal to camper vans and motor homes in 2017, when many other New Zealand towns were frustrated with the impacts of freedom camping. They wanted to encourage campers to look for less populated camp sites around the country to take pressure off busier ones.

“We are saying ‘come to Mangatainoka, plant a tree, then you can come back year after year and watch the tree grow’. It’s good for the environment and it’s good for the soul.”

They’ve gone from almost no overnight stays two years ago to at least 10 camper vans in the reserve each night, and a record of 40. They’ve had an application accepted for Tourism Infrastructure Funding to add toilets, showers and rubbish bins at the reserve, and the Tararua District Council has also put forward funding. They’ve planted more than 2000 native trees and have thousands more seedlings in the nursery.

“What started as a small idea has snowballed into something great for the region,” Rosie says.

Since October 2016 when Rosie and Nick took over operating the visitor experience from DB (so that DB could focus on its core business of brewing) they’ve kept adding new reasons to visit, increased visitor revenue, and almost doubled the number of people they employ from 11 to 20.

Rosie says the brewery’s success is important for Mangatainoka, for travellers, and for New Zealanders.

“Tui is a big part of this area’s history and a part of all of New Zealanders’ memories. This brewery has been around for 130 years and through learning about that you can learn about all sorts of things like biology, the history of engineering and brewing in this area, how people lived in the area at that time, and in more recent times what Tui has meant for Kiwis and how it has been a reflection of our culture and our lifestyle and our people.

“There are a lot of brands like that in New Zealand, like Whittakers and Speights and Cadbury — and why Tui is so unique is that it is literally in rural New Zealand, surrounded by farmland, not in a city or central tourist location. It creates a real sense of occasion for people who come to the brewery.”

Like the other big brands, it would probably make financial sense for DB to move its brewing operations to a main centre, she says.

“But it’s such a popular attraction and New Zealanders love it so much. It’s tourism that is keeping it here . . . The tower is here and the history is here, and the new brewhouse, but it is the people who come here to see it who are keeping it here.”