It was all about books on Booktown weekend. A sign showed that at the War Memorial. PHOTOS/PETE MONK

Featherston’s Booktown Karukatea’s comeback from a two-year-long absence was an extraordinary success on many fronts, according to festival operations manager Mary Biggs. The festival, which had 55 events, 99 presenters and literary provocateurs, and a record 25 booksellers, was last staged in 2019 after last year’s event was cancelled due to covid-19.

It made its glamorous return on Friday, May 7, when nearly 300 people gathered for a traditional serving of gourmet fish and chips, poetry royalty, and some non-traditional “outside the box” poetry.

Biggs said Featherston was alive with books, writing and provocative ideas over the three-day literature celebration and was overwhelmed by the community’s response – Wairarapa and beyond – with most of the 55 events selling out.

“More people turned up than we expected as there were lots of door sales which meant we had full rooms for most of the events.

“Having so many books and writers concentrated in town over that weekend had a great flow-on effect for schools, children and businesspeople.”

Biggs said one of the most satisfying parts of the festival was seeing children engaged in books. 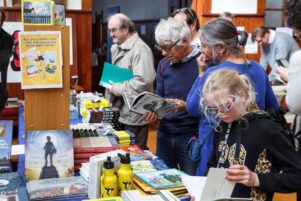 Featherston school pupils from St Teresa’s, Featherston, and South Featherston School, and Kuranui College Year 9-10 students were handed three $5 book vouchers to use at the event.

“We had lots of kids who came to the event and used those vouchers to buy a book of their own choice,” she said.

“I don’t know what the numbers [from sales] are, but from all the bills we’ve been paying [reimbursing booksellers] it’s been a very good response.”

Biggs said retailers in South Wairarapa also cashed in on the large crowds at the festival in what would have been a big economic boost for the district.

“The anecdotal evidence we’re getting is that retailers in Featherston themselves all had record-breaking boomer days as there were lots of people shopping in town,” she said. 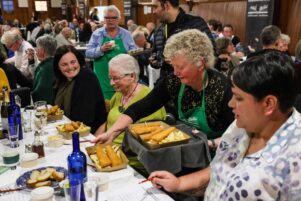 “I also heard Martinborough was extremely busy during those days during Booktown.”

Although Booktown was highly successful this year, one matter Biggs said the board would discuss was making the festival’s number of events smaller next year due to the many first-class events happening simultaneously.

“Throughout that weekend, we found choice was really tough for people because events were of such a high quality it was hard to know what to go to at the same time,” she said.

“There were three or four events competing at the same time, so we may look at limiting competition.

“Overall, it was just an extremely successful and pleasing festival.”