Book On The Move About 100 people attended the launch of the diary of a Masterton World War II soldier on Saturday ahead of ANZAC Day.

The diary, called On The Move Again, was written by Sergeant Len ‘Shorty’ Frances during his time in Egypt and in the Italian Campaign. It was adapted and arranged for publication by his son, Masterton-based military historian Neil Frances.

The launch was held at the Farmers Market in Masterton under the Solway Showgrounds grandstand, the exact spot of the officers’ mess when Len Frances’ Ruahine regiment went into training in the grounds early in the war. 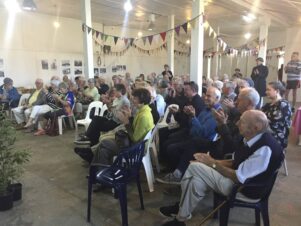 Attendees at the ANZAC weekend launch.

Neil Frances was very happy with the launch.

“I enjoyed it a lot. There’s a sense of relief it’s out in the public arena.”

Frances said army personnel from Linton, near Palmerston North, had attended as well as military historian Peter Cooke, who had formally launched the book.

“It all went very smoothly and the audience was receptive,” he said.

“We have launched books everywhere from Parliament to woolsheds, but never in a Farmers Market before.

“It was successful as a book launch. There was a warm feeling to it,” he said.

“People are very interested in stories about Wairarapa and the people who live here.”

Grant said musicians at the market played WWII music at the event, which had created an evocative atmosphere.

A WWI diary by a soldier from Carterton had been sold with the book as a package deal and that book had sold out at the event. More than 50 of Frances’ books had sold as well.

The market had good attendance and some stall holders reported one of their best mornings ever. Copies of On The Move Again had sold briskly.

The book was published by the Wairarapa Archive/Fraser Books.