Wool prices are already at a record low, but contamination incidents and irremovable blue markings from a gel spray, could hurt prices further, Wool Wairarapa says.

Owner and operator Daryn Pedersen has been in the industry for close to 40 years, but it wasn’t until recently that he started noticing blue marks through the wool that wouldn’t wash off.

He believes the blue markings were the result of a gel spray used by farmers to scan their ewes to see if they were pregnant and how many lambs they were carrying.

The blue markings meant the wool couldn’t be dyed later and so had to be scrapped.

“The fashion still is pastel shades for carpets. That way we can wash it and we can dye it.”

He said the products being used were labelled as scourable, meaning that they would wash out, but he had not found this to be the case. 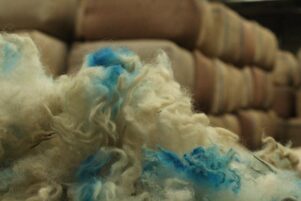 “It’s alright to spray a cow, a goat, a deer — but when it comes to the wool, it has no commercial value,” he said.

“We’ve just got to throw the wool away.”

Last week he saw 50 bales, estimated to be worth about $20,000, rejected because of the wool being contaminated.

There was also an issue with foreign objects, like singlets and other clothing, making their way into the wool bales.

“It’s contamination across the board. That’s becoming a big concern, especially if wool is going to be sent in a greasy state, straight from my wool store to China.”

It risked New Zealand’s reputation as a top producer and exporter, he said.

“It’s putting our reputation at risk. It’s not like we would send lamb that’s off or apples that are rotten overseas.”

He understood it was difficult and frustrating for farmers though, and said wool prices were “quite dismal”.

“The prices for cross bred wool are the lowest they have been in 50 to 60 years while shearing costs have gone up. Farmers are a bit dismayed with prices they are getting on wool compared with the cost of harvesting.”

He said it was a shame that wool prices were so low because it was such a good product.

Pedersen called on sheep farms to stop using the aerosol-based sprays and suggested using the crayon, mostly commonly used for tupping markings, as an alternative.

He also suggested farmers sweep the woolshed with the shearing gang to check for loose objects before getting started.