The Judds Rd fire caused 70 per cent damage to the house making it “unliveable”. PHOTOS/SUPPLIED

A family of six is mourning the loss of their pet cat and dog after a fire that began in their dryer engulfed the whole house making it “unliveable” on Saturday night.

Masterton Fire Station officer Mike Cornford said fire services were called to a laundry fire at about 7.30pm at a house on Judds Rd.

En route to the fire, its status changed from laundry fire to “a structural fire, following multiple 111 calls from neighbours”. 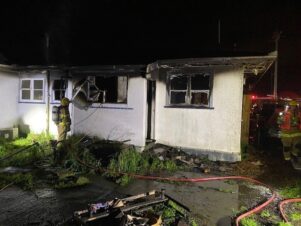 “When we got there, the house was well involved in fire.

“It took us about 20 minutes to get it under control.”

The property owner told the Times-Age the family escaped through the hallway and could see the flames engulfing the house as they left.

Four children were in the house at the time of the fire.

“We had just enough time to get the kids out and that was it – less than a minute – it all happened very fast,” the homeowner said.

Cornford said there was no time for the family to retrieve any possessions on their way out.

“The door for the laundry was actually closed but one of the occupants saw smoke coming out the top of the door,” he said.

“When they opened the door, the whole thing had burst into flames, so they only had time to get out of the house and ring us. 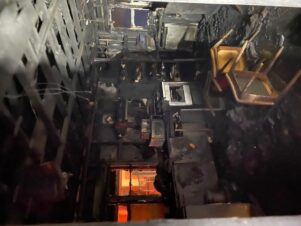 “All their belongings, everything was lost.”

He said the house was 70 per cent damaged.

A fire investigator came from Wellington and determined the fire was an accident.

Cornford said people needed to look at cleaning the lint out of their dryer filters periodically “so there’s no build-up of lint and heat build-up that could ignite something”.

The family have sourced school uniforms for the children from friends and family and are staying at a motel temporarily.

“We’ve been very blessed with friends and family helping out.