Birth of a violin maker Ed Cooke using his custom-made ‘gizmo’, which sits inside his drill. PHOTOS/ELISA VORSTER

You could bump into Ed Cooke on the streets of Greytown and have no idea he carves beautiful musical instruments in his garage. ELISA VORSTER went to find out how he started his unique hobby.

As a member of the Wairarapa Community Orchestra, I had heard Ed Cooke’s name thrown around by our conductor Ruth Eckford who was always boasting to our audience that our viola player was “playing on an Ed Cooke viola”.

When I met with him at his home in Greytown, I only had one burning question – how does a person even begin making a viola?

I had barely stepped out of the car before two things happened – he told me he makes more than just violas, and a hundred more questions sprang to mind. One of Ed Cooke’s violin moulds (left) and the back piece of his 13th violin.

Mr Cooke started learning the violin at the age of five, although he originally wanted to learn the cornet.

“My father was a returned serviceman and he listened to band music.

“I thought ‘what a fantastic sound’.”

However, he was a bit too young to be able to play the cornet, and someone suggested the violin instead.

He went on to play professionally for 26 years in Orchestra Wellington on both the violin and viola.

For those questioning the difference between the orchestra Mr Cooke played in and the orchestra I play in, it can be summarised simply as Mr Cooke auditioned for his spot and was paid to play, whereas I just turned up one day with my clarinet and now the conductor is stuck with me.

Mr Cooke only started making violins at age 70 after his retirement from the orchestra had left his evenings empty.

“I’ve got to fill in the nights somehow,” he said.

His son, Grayson, gave him a book on how to make violins and from there his new hobby took off.

I was still astonished at the thought of reading a book about making violins and then being able to do it, so I asked him if he had previously worked as a carpenter.

He laughed and told me he worked as a lawyer for over 50 years, but woodworking had been a hobby of his since woodworking class at primary school.

“The book gave me enough information to get going so I had a hack at it.” 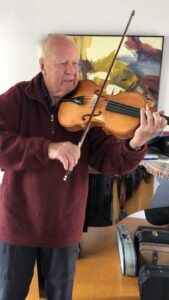 Ed Cooke playing one of the violas he made.

Mr Cooke started by making a mould from a violin he had played in the orchestra – a Degani made in 1911 by Giulio Degani in Venice.

He had made several wooden moulds after the initial mould wasn’t quite right and showed me all the failed projects under his bench.

“The measurements are crucial – you work in fractions of millimetres.

“It doesn’t take much to make a mistake and I’ve made every mistake known to man.”

And it’s not just the measurements which make a good violin.

The wood he uses is from a family in Germany who work with Mr Cooke to ensure he can source wood which provides the right tone, as well as have the desired grain and flame for appearance.

He uses a technique called stop drilling which drills holes at various depths which helps him later carve the correct thickness at different points of the instrument.

However, to do this, he needed to make his own tool or “gizmo” to set the drill correctly.

He also makes his own varnish from kauri gum, which involves heating the gum at a high temperature and allowing it to cool before crushing it and reheating it again with other ingredients.

Because the varnish only dries under UV light, Mr Cooke used to hang his freshly varnished violins on the washing line to dry off in the sun.

“They would go around and around, sometimes with the laundry on there too.” 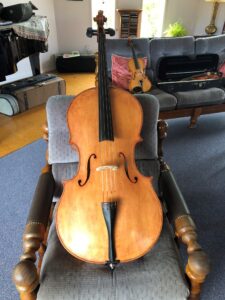 He has since built a special drying cabinet containing UV lights and used a motor from a disco ball rotate the instruments as they dry.

Violin-maker Malcolm Collins, from Upper Hutt, caught wind of the fact Mr Cooke had begun making instruments and had offered to pass on his knowledge.

“He invited me down to his workshop to watch the process.

Mr Cooke still refers to himself as an amateur despite having now made 12 violins, four violas, two cellos and a ukulele.

He sells them to people through word of mouth and said it was still very much hobby, not a business.

When asked what makes the perfect violin he answered “that’s the eternal mystery”.

He said he will continue to make instruments for as long as he can, “much to my wife’s annoyance”.