Between the flags and beyond Jane Tiley has been a core member of the Riversdale Beach Surf Lifesaving Club for 15 years. PHOTOS/SUPPLIED

If you’re ever on Riversdale Beach, you’ll most likely find a familiar figure between the flags. JOHN LAZO-RON reports.

Those words basically sum up the number of volunteer surf lifeguards, trainers, instructors and administrators from the Riversdale Beach Surf Lifesaving Club who devote precious time to keep their community and people who tread the water safe.

The club has built a reputation as one of the most formidable surf lifesaving clubs in the Wellington region.

It frequently punches above its weight, which was displayed when they won Club of the Year at the Capital Coast Surf Life Saving Awards.

And one of the core members that has helped the club achieve its status is Jane Tiley.

Tiley has been at the club for 15 years. She started off as a lifeguard but has taken on many different roles as time has passed. She is now one of the club’s callout squad members who regularly turns out for Wellington Free Ambulance as a first responder.

Tiley said she took on the role as a surf lifeguard for a personal challenge, after many years playing professional basketball in Europe.

However, after time, she said it was more about doing her part for the community.

“Initially, I wanted to become a surf lifeguard for the challenge. I just finished playing professional sport and I wanted a new challenge and physically that was good,” she said. 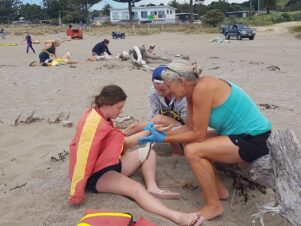 “But once you become a lifeguard there’s all the additional elements to it, including supporting the community.

“I think it’s important to help the community. If you live in a small community like Riversdale everybody needs to do their bit and that’s the role I can play with the club, and hopefully it’s useful to people in times of need.

“To be honest, there are so many people doing different amazing things here, I’m just doing my bit.”

She said she was now responsible for the club’s Nippers programme [5-14-year-olds] that teaches children life guarding and water safety and skills over the school holidays in January.

She said inputting the skills she has learnt to the younger generation as well as driving the Inflatable Rescue Boat [IRB] was one of the most satisfying parts of her role.

“I really love driving the IRB in preparation for rescue or transporting the nippers to their activities. That was one of the major drawcards really along with training the young lifeguards and the nippers.”

“And through that, each year just keeps going for me.”

Throughout the 15 years Tiley said she has seen it all, from scrapped knees to serious emergency, which she has come to learn was all part of the role.

“We get everything and anything really,” she said. 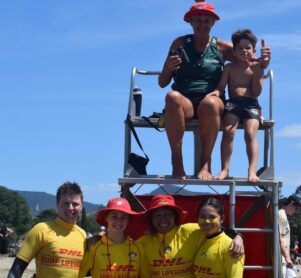 Jane on patrol on the Riversdale Beach tower with her son and fellow lifeguards.

“We’ve had boats that flip with serious injury, quad bike accidents, heart conditions, we’ve had road accidents, we’ve had two or three people barbed by a sting ray, and in some cases death experiences, which really hurts because you do your best to save people. But there is a dark side to it at times.”

Although proud of the win, she said the entire club deserved it.

“I’m very humbled by the award but it could have easily gone to anyone at our club because we have a great crew. I don’t want to take the limelight because everyone at the club does great things here.

“We’re a small little club in Wairarapa and to be up against all the big clubs of Wellington [in the club of the year award] was really satisfying and a reward for everyone’s hard work.”

Tiley said she was thankful to the Riversdale community for the support they have shown to keep the club afloat.

“The support we get from the local community is amazing,” she said.

“We have to fundraise for everything that we do, so it works hand in hand. We try and do the best we can to keep people safe and they always step up and support us so it’s a great environment to be in.”

Tiley said she no plans to give up her roles with the club any time soon, so if you’re ever in Riversdale, don’t be surprised if you see her fishing, teaching her son to surf, going out and checking the craypots, or just taking in all that the sea has to offer.