Crowds at the auction at 2 Daniel St, Martinborough on Wednesday. PHOTO/KAREN COLTMAN 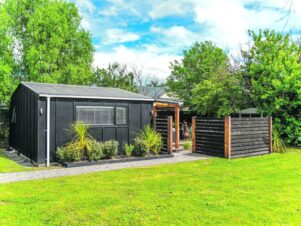 A ‘glammed-up’ shed on a modest piece of central Martinborough land sold at auction for just under $600,000 on Wednesday.

Tremains Real Estate agent Pete Sykes said it was a “fantastic result” for the seller, Damo Neal, who was a contestant on ‘The Block’ in 2014 [TV reality show house do-up competition].

The land at 2 Daniel St was previously subdivided, and the 1980s double garage was sold with the separate 447m2 section.

Neal spent the past few years during his weekends turning the 25m2 garage into a modern studio apartment.

It has no kitchen but a small kitchenette in the corner of the lounge.

The shower, toilet, and laundry are in the same room, which is just off the bedroom/lounge.

The outdoor patio area has rustic wooden seating, a brazier, and a spa pool.

Tremains real estate agent Bevan Saywell led the auction for a lawn-full of about 60 bidders.

At the outset, plenty of hands popped up with bids.

But most bidders dropped out when the property hit half-a-million dollars and Wairarapa real estate agents put their phones down.

These people became spectators of a bidding war between three people.

When the property got to $550,000, the third bidder’s hand stayed down, and the heat was on the last two men standing.

The Wellington-based man who let it go at that point said he was looking for a small place within walking distance to the village.

“We had a strategy to go big and go fast but then realised the person we were bidding against was not going to stop and had deep pockets, so I let it go,” Mark Bramwell said.

Sykes said the two final bidders were standing next to each other so this “hyped up the situation”.

But he said he had to convince Neal to sell by auction because his previous experience was uncomfortable.

“The vendor is shocked and very pleased with the outstanding result,” Sykes said

Neal and Sykes were long-term friends and were in the police force together.

“What has happened is a bit crazy. I could see that people at the auction were surprised too and so were the neighbours.”

After the auction, one attendee who lives nearby jokingly announced he was going straight home to put a ‘for sale’ sign on his front lawn.

Neal is handing over consented plans for a 70m2 two-bedroom home for the section, and then he is heading to Bay of Islands to go surfing.

There is another auction of a three-bedroom house in Featherston this coming weekend.

Property Brokers agent Benn Milne said this was what purchasers were wanting.

He said he was getting at least 10 offers on properties lately.

“Purchasers increasingly want an open and transparent system where they can see what they are competing with,” Milne said.

“We are going to hold more auctions as there is a huge demand at the moment and this just makes it fairer, we think.”