They say building a house is one of the most stressful things you can do in life . . . but what if two brothers are doing the job for their parents?

For some families this would be a recipe for disaster, but for the Sextons of Masterton it’s literally been a winning formula. 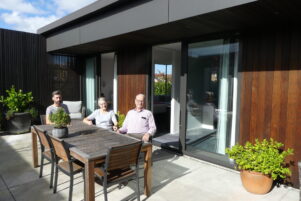 One was for his parent’s house in the Cashmere Oaks subdivision on the northern edge of Masterton – the other was a house built for his brother, Stewart, in Eastbourne.

Both were built by his brother, Masterton builder Richard, who won a swag of Master Builder awards for his parents’ home, including the Supreme Award and Craftsman awards.

The Cashmere Oaks house has stunning views of the Tararua Ranges – something the design makes full use of.

“Every room we use has a view,” John says.

It also features an internal courtyard to provide a sheltered, sunny spot when the prevailing nor’westers blow.

As for stress, none of those involved is admitting to any major issues caused by keeping it in the family.

“I think it actually made it stress-less,” John said.

“Even though we sometimes had different thoughts, we worked them out. There were no serious differences of opinion.”

“Having the boys involved, if there was anything we were worried about, we knew we could just leave it to them,” she said.

The result was “a lovely house to live in”.

Builder Richard, the youngest of the three brothers, has a frank assessment of his brother the architect.

“If you’re an architect and you can’t design a house for your parents, then you’ve got a problem – you should know pretty well the way they live,” he said laughing. 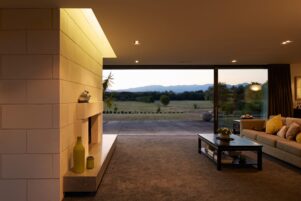 John and Heather Sexton’s Cashmere Oaks home in Masterton, designed by their architect son Andrew and built by their builder son Richard. PHOTO/SUPPLIED

The three-bedroom house is 230m2 in size, including the garage, smaller than the previous family home, on a lifestyle block at Homebush.

Andrew went to Lansdowne School, now closed, and then to Hadlow School and Rathkeale College.

He says after a tight space in Eastbourne for his brother’s house, his parent’s site was at the opposite end of the scale.

“The site has wonderful views . . . the idea was to open it up so there is a lot of glazing on the western side,” he said.

The relationship among architects and clients, and builders, let alone brothers, can sometimes be brittle, but Andrew says all went smoothly.

“It was a very pleasant process. In some ways it was easier because you know how they live.

“We challenged them on a few things, and they took a few of those on.”

Builders inevitably have views on how things should be done – “You always have those discussions with builders, but we did those at an early stage,” Andrew said.

The award judges were impressed.

“This house is a model of well-executed design in the depths of suburbia.

“Centred around a beautifully relaxed courtyard space, the house offers its occupants an overwhelming sense of comfort.

“The detailing of the stone around the fireplace, and in other areas, illustrates the high level of care and attention expended on the project.”