Artists go for a walk on the dark side Opening tomorrow evening, the exhibition comprises of a collection of striking paintings Campbell lovingly refers to as his “black on black on black” series. 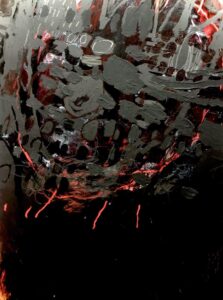 One of Campbell Kneale’s “black on black on black” paintings – inspired by the spiritual practice of Black Sun meditations. PHOTO/SUPPLIED

The abstract, highly gestural works, made up of layers of black paint, are set to a soundtrack: a 30-minute soundscape piece composed by Zac, featuring levels of instrumental music interwoven with tonal frequencies and ambient sounds.

At the gallery, Zac’s musical score will play on a loop, treating viewers to a multi-sensory experience – as they take in both the different sound vibrations and the many textures of paint.

Campbell’s paintings are inspired by the “Black Sun” – an ancient concept in alchemist philosophy which has been absorbed into meditation practice.

“Black Sun meditations”, which Campbell has practised, are intended to help a person confront, and eventually make peace with, the “darkest” and most negative parts of their consciousness which they have previously suppressed.

Campbell’s paintings were an outlet for the emotions he experienced during the meditative process, which he describes as a “highly transformative, but visceral experience”.

So visceral that, alongside regular acrylics, he was inspired to paint with the ash residue left over from his meditation sessions – left by notes and objects burned in the process.

His exhibition pays tribute to the revelatory power of darkness – the potential for self-discovery and “infinite possibilities” amid our most desolate and despairing moments.

“In our culture, the sun is fundamental to our consciousness: it’s loaded with symbolism, representing light, joy, growth and knowledge,” Campbell said.

“The inverse of that is the nocturnal – the shadow, representing demise, stagnation and the unknown.

“The Black Sun is a source of light – but it illuminates the dark parts of our lives, the parts that are decaying and have fallen into stagnation. In meditation, we can resolve to let these parts go – mourn them as little deaths and start again from the beginning.

“The Black Sun represents the light in the darkness when we examine these parts of ourselves. It begs the question: if you focus only on the bright parts of yourself, and ignore the ‘bad stuff’, can you really say you’re a ‘good’ person?”

Campbell has been a keen painter since his youth: specialising in art with strong socio-political messages, critiquing consumerism, structural inequalities, and media influence.

Offshore, he is best known for his ambient noise music projects Birchville Cat Motel, Brilliant Swords and MING, with which he has toured throughout Asia, America and Europe.

As an artist, he said he has always been drawn to the colour black – and recalls a time when he was “banned from the painting table at kindergarten” for painting entirely in black and refusing to use “nicer colours”.

“I think people were a bit disturbed – so I had to go and hang out in the dress up corner and dress as an astronaut,” he laughs.

“Black has always resonated. I grew up in quite a conversative household, so black was danger. But, to me, it was all about mystery, allure, and the void – and all the possibilities within.

“No other colour has quite the same resonance.”

In fact, many of the paintings have a luminescent quality – a nod to blacklight, which can illuminate objects undetectable to the naked eye.

“It ties in with the theme of discovery, and finding out who you are in the dark,” Campbell said.

“There’s an energy to the blackness – it glows and it’s alive. The texture and light make the paintings almost hum. They jiggle inside the eyes.” 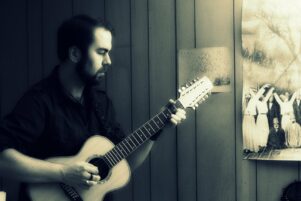 Adding to that “hum” is Zac’s evocative score – which he was immediately inspired to compose after seeing some of Campbell’s paintings on Facebook.

“They were so bold – and had this very brutal quality,” Zac, a long-time fan of Campbell’s music said.

“I had a strong emotional reaction right away. I could practically hear the paintings in my head. I had to create music.”

Zac spent the next two months recording the soundtrack, using a range of instruments, including a baritone guitar [which he played with a violin bow], organ, gong and “an old drum from the 1950s”.

Using recording software, he added “extreme frequencies” – treble and bass pitches which are not easily heard by the human ear but can be sensed in the body.

Adding music to an art exhibition, Zac said, adds another dimension for the viewer: as the energy from sound frequencies can heighten the senses and give the art the effect of “jumping off the page”.

“It definitely helps the viewer connect more with the paintings,” Zac said.

“We hope the exhibition touches people on some level. It’s dense and immersive, dark but not necessarily bleak or depressing.

“If people come and have a strange experience, that works for us, too!”