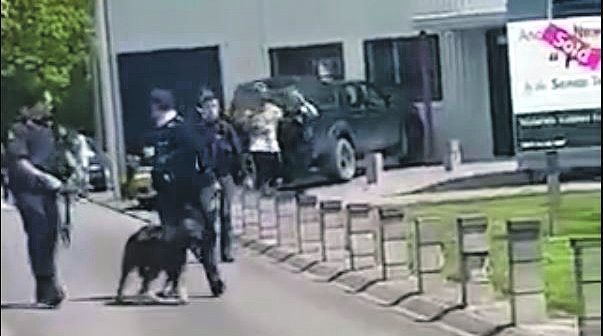 The police action on Makoura College student Peter Hing Jr was captured on a witness’ phone.PHOTO/SUPPLIED

Makoura College student Peter Hing Jr had just finished playing basketball at lunchtime when he was surrounded by half a dozen police offers and arrested twice for a crime he did not commit. EMMA BROWN reports.

It was just after midday on Friday, October 25, when the 16-year-old left the school gym where he had been playing basketball with friends.

Several police officers approached him, yelling, “Get on the f***ing ground – you’re under arrest”, Peter told his mum Liz Hing.

They then grabbed him by his shirt, pushed him against a school fence, and handcuffed him.

He was not told what he had been arrested for, was not asked his name, and was not read his rights, Liz Hing told the Times-Age yesterday.

The officers had mistaken him for an 18-year-old robbery suspect who had escaped from custody earlier in the day, fleeing by car.

When Peter recounted the arrest to his mother, she asked him if he was ever physical with the officers, and he said, “No” – the only thing he did was pull his shirt from the officer’s grip.

By this time, Makoura College assistant principal Don Miller was at the scene and asked what was going on.

Because Peter was wearing mufti playing basketball, police asked Miller if the teen was a student, which Miller confirmed.

They then uncuffed Peter and asked Miller to confirm he had been at school all day, which he was unable to do without records.

A dog handler then approached the scene, yelling that he had seen Peter in the fleeing car, and to arrest him.

Peter yelled back that he was not in the car and refuted what he was being accused of.

The dog handler was adamant that he had seen Peter in the car and so police officers again pushed him into the fence and cuffed him.

They escorted him out the school driveway to the police car and drove him down River Rd.

Notification came over the radio that the actual suspect had been arrested at a different location.

Not until this point did the police officers ask Peter what his name was.

Police drove him home and dropped him there.

They did not contact his parents regarding the incident.

A video of the police escorting Peter off school grounds was taken by one of his cousins who had been driving past the school and stopped when they recognised him.

Witnesses, including Peter’s cousin, and the mother of the actual suspect yelled at the police telling them they had the wrong person.

The mother of the suspect yelled at them, “You know it is my son. Why are you arresting him [Peter]?”

She spoke to Liz Hing a couple of days later and said she didn’t know why police had arrested Peter because they had already been to her house to arrest her own son – “so they knew who they were pursuing”.

Police were approached for comment on the incident and confirmed a 16-year-old male was arrested and released a short while later.

While the arrest was unfolding Peter’s mum, who was in Rarotonga, was contacted by a schoolteacher who told her Peter had been arrested.

She gave her husband’s contact who then went to the police station to try to find his son.

He was told they had nobody by that name at the station and so he drove around looking for Peter and flagged down a police car which turned out to be the dog handler involved.

He asked him, “What have you done with my son?”.

The dog handler told him another unit had dropped him off and asked the father to apologise to Peter on his behalf.

Liz Hing said the family were unhappy with police’s heavy-handed tactics and failure to follow police procedures, especially when arresting an innocent minor.

She said her son did not even look like the suspect and was not asked for his identification.

“Shouldn’t you have asked him that before you grabbed him, before you smacked him against the fence, and definitely before you cuffed him twice?”

She said when she heard about her son’s arrest, she was panicked and desperate to let her family know so they could find out what happened to him.

She intends to lodge a complaint with the Independent Police Conduct Authority.