The Salvation Army’s $2.9 million do-up and new build of the Masterton premises on Ngaumutawa Rd goes to the council for approval next week.

Consent is expected to come through in a few weeks and the first slab to be put down by Christmas.

The charity’s officers and operations moved out in January.

The work includes refurbishing the rear building and constructing a new building to seat a congregation of around 100 people.

“Some people think we have abandoned the town but actually we’re busy getting a great new facility under way and are keen to get back in there,” Sallies spokesman Peter McRae said.

The council’s earthquake strengthening requirements posed some big questions for the organisation and it has taken five years to get to this point.

“Initially, we intended to earthquake strengthen the two, large roadside houses, but this has fallen by the wayside due to eye-watering costs,” he said.

“Now it is all go for the back buildings as the quotes squeezed in just on budget. It will have a new congregation hall, social space, office, and commercial kitchen.”

The Whatman site is considered a Masterton landmark. The brick wall across the front alone is registered as historic and protected.

McRae said he’s pleased to have secured Masterton business talent for the design and build for the heritage building. 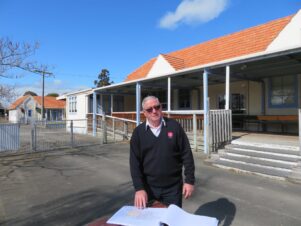 Silverwood Architects were contracted to design for earthquake strengthening and to design the new assembly hall. Not only have they designed this, they have included some features of the 1920s buildings that were lost over the years.

“Me and my son, James, have created a design that not only brings in modern aspects to the facility such as taking out old cladding and getting more light in, but also we are bringing back the old ceilings,” Darryl Silverwood said.

“The original vaulted ceilings are being restored and some of the original supports will remain. We consulted Marshall Day Acoustic and they confirmed this work will improve sound for the congregation.

“We have designed a contemporary addition to the building and are not matching every element of the original but linking between old and new.”

The firm is also reinstating parts of the original building that have been hidden by various add-ons.

“We are aiming to lodge with council in the next week or so and peer review with engineers will occur shortly,” Silverwood said. “We’ll have requests for more information to handle, but are on track.

“I’ve found the Salvation Army team lovely to work with and we’ve been involved with them for a long time. Good things take time.”

MB Brown Limited are contracted for the building work.

The Whatman land and buildings were bequeathed to the Salvation Army in the 1920s and became a children’s home [Celia Whatman Home] until around 1980.

The future of the front two houses is uncertain while focus goes on the do-up and new build.

Five acres of the original estate was sold but there is no intention to sell the remaining 10 acres according to McRae. Some land is likely to be earmarked as a future site for a social housing build in a joint project with central government.

The Masterton Salvation Army still hold a weekly bible study group and ‘Come and Meet Each Other’ every Thursday from 10am to noon in the ‘yellow house’ [the roadside house by the front gate].