Art and culture are essential to people’s well-being.

That’s the philosophy that has driven Aratoi Regional Trust chairwoman Barbara Roydhouse to support the Aratoi Wairarapa Museum of Art and History across multiple eras.

This year, the museum is celebrating its 50th birthday, and a special exhibition marking this anniversary is opening on Friday night.

With more than 3000 items to choose from it has been no easy task to put together.

The selection reflects the highlights and significant events, as well as the many gifts received, that have helped form the Aratoi collection.

From the obvious, such as Taonga Maori and work by icons Colin McCahon, Robin White and Barbara Hepworth, to the less obvious: moa bones and an 1869 ship’s biscuit with a tale to tell of the visit of a prince, there will be some surprises as items never shown before emerge into the light.

Ian Grant and his wife Diane at an event at Aratoi last year. PHOTOS/FILE

The full cost of the arts centre, including furnishings and fittings, was $45,741, which was met by the Arts Hall Trust Fund to which the Masterton Trust Lands Trust had contributed $22,042.

Before the opening, a group of residents – including John Maunsell of Hansells – purchased the Barbara Hepworth sculpture “Galliard – Forms in Movement” in 1963 at a cost of 475 guineas, for the projected arts centre.

This was the first of many actions of community support for the regional cultural institution.

Entering the 1980s, finances were getting tighter and tighter, according to Roydhouse.

Back then, the building was “like a rectangle”, she said.

“It was right on the footpath; it wasn’t very wide. 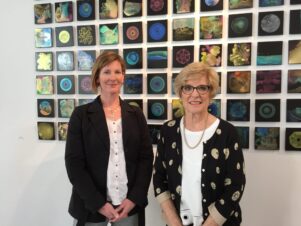 “You walked in and there was a foyer, and the office, a little kitchen, and then one gallery.

“You could practically stand at the doorway and see everything there was to see.”

With an economy in recession, money was tight.

“I remember being more worried about how we were going to pay the power bill than almost anything else,”

“That’s how tight the money was.

“We were funded by the councils and the trusts – and it sounds ungrateful to say this – but it was never enough.

“The string was always too short.”

By the 1990s it was evident that the Wairarapa Arts Centre building was inadequate, particularly for the growing collection of art works and taonga Maori.

It was unable to provide collection space for historic objects, many of which went out of the region to the Dominion Museum, now Te Papa.

In 1996, the Wairarapa Cultural Trust, now Aratoi Regional Trust was set up.

This was the organisation that ran the centre and saw the new, much-larger building come to fruition, which opened in February 2002.

This new building was named Aratoi.

Masterton Trust Lands Trust provided the land and funded the architecturally award-winning building and fit-out, and Masterton District Council was to provide the bulk of operational funding, with contributions from Carterton and South Wairarapa councils and other local trusts.

“Bob Francis was the mayor at the time, and people involved in the new build would meet every week to ensure this all happened,” Roydhouse said. 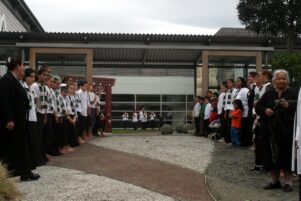 The opening of Kahungunu Ka Moe – Ka Puta at Aratoi Wairarapa Museum of Art and History, 2004.

“I think it’s a miraculous building for a town this size.”

Roydhouse said the biggest similarity now to 50 years ago is that the community has always “worked very hard to have a flourishing and stimulating gallery for all the people of Wairarapa”.

“We have the foresight of the trustees of the Masterton Trust Lands Trust to thank for an establishment not seen in other similar sized regions.

“The difference between Aratoi and the Wairarapa Arts Foundation, is that once Aratoi was built, the caring of our taonga stored in other places could be returned, cared for and viewed.”

Ian Grant, who has also been involved with Aratoi in various capacities over many eras said the Wairarapa Arts Centre was “ahead of its time”.

“In the early 1960s, when they first started talking about it, Masterton’s population was about 15,000, maybe less.

“No other community this size has done anything like this.”

Grant, who admits his artistic skills don’t go much further than drawing a straight line, said he has always been interested in art arts and culture.

“It’s something I have always felt has been important – it’s an important part of the soul.

“People who manage to live their lives without the arts are missing something.

“We are trying to provide that for everyone.”

Grant was on the Wairarapa Arts Foundation committee from 1975, was president of the foundation from 1976 to 1979, and then deputy chairman for several more years.

He was on the committee again for a period in the late 1980s and early 1990s and was Roydhouse’s deputy for a period. 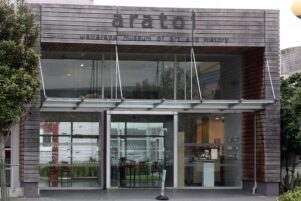 Aratoi Wairarapa Museum of Art and History, the new build.

Aratoi Wairarapa Museum of Art and History director Susanna Shadbolt has been working closely with staff to ensure the 50th anniversary programme – supported by Hansell’s, Goodeye, Resene, Trust House and Friends of Aratoi – can be enjoyed by everyone in the region.

The exhibition showcases works acquired from each decade since its opening in 1969.

The sponsorship from Resene means that several sections of the gallery space are coloured differently to draw a distinction between the decades.

In the most recent decade, a bicycle from 1893, thought to be the link between the Penny Farthing and the modern bike, will be displayed.

It will be exhibited in the most recent decade because it was returned to the Aratoi collection in 2012 after being held in Wellington.

It was originally part of the Masterton Museum Collection.

“We are really telling the story of the collection through this exhibition,” Shadbolt said.

“It is an account of 50 years of collecting … you can really tell what happened at the time – what was important.”

She said the best part about her job was “changing perceptions” that people had about the museum.

“What is really worth celebrating is the past few years where we feel the community has really come on board and is recognising Aratoi as the caretaker of their cultural, and visual history, which is really special.

MTLT board chairwoman Leanne Southey said Masterton was “extremely fortunate to have a facility showcasing these things which is so accessible to both locals and visitors alike”.

“We are extremely proud to have contributed to Aratoi’s first half century and we look forward to continuing our relationship in the future.”

Bob Francis will be the MC, the three Wairarapa mayors will officiate, and the guest speaker will be Luit Bieringa, former Aratoi director and director of the National Art Gallery (1979-89).

There will be a free public talk on Saturday at 11am by Aratoi director Susanna Shadbolt and collection manager Bronwyn Reid.

Free floor talks will also take place at Aratoi every second Sunday from September 1, at 2pm.

A free education programme will run from Term 3, and a publication will launch on Aratoi’s actual birthday, Friday, October 11 at 5.30pm.