All Blacks boss in town All Blacks manager Gilbert Enoka gets presented a gift after his inspirational speech. PHOTOS/JOHN LAZO-RON

Wairarapa was given a powerful lesson in success on Tuesday after internationally renowned All Black manager Gilbert Enoka popped in to deliver a jaw-dropping inspirational speech to a sold-out crowd at the Carterton Events Centre.

Hosted by the Leaving the Ladder Down Trust, Enoka’s presentation was part of the Wairarapa mentoring programme’s annual Leadership Talk series, their first big event since covid-19.

Enoka – who had a long history of success as a mental skills coach with New Zealand’s corporate and sporting elite, notably the All Blacks – used his life story and experience in the sporting arena to give a simple but compelling blueprint on how to become the best you. 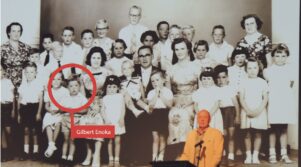 All Blacks manager Gilbert Enoka shows a younger picture of himself in an orphanage.

He spoke about becoming an orphan at 18 months and not leaving the orphanage until 12. Telling the crowd when he returned home to his mother, he made the decision he wasn’t going to let his past determine his future.

He went on to challenge the guests to think as such and think big about their future.

“I want to set a challenge for you. I want people to be able to leave understanding a challenge, that if taken, will ignite a future that has wonderful possibilities no matter what age you are.”

He wrapped up the presentation with a video of the All Blacks before the 2019 Rugby World Cup taking a tour through to Ruatoria on the East Coast – a place considered where this nation began – so they could be nourished by the understanding of what it meant to be a New Zealander and All Black.

Enoka’s power talk inspired many on the day, including Masterton teenager Phillip Faaiuaso who said the speech has made him think firmly about his future goals.

“[The speech] was really good,” he said.

“It put some images in my head about what I can do better in life.”

Wairarapa-Bush chief executive Tony Hargood said, “I think it was a great opportunity for the people of Wairarapa to get a good insight into what high performance looks like, and having Gilbert here to speak was special.”

After the speech, Enoka said he thoroughly enjoyed delivering his message, as he had a particular sweet spot for Wairarapa because of his deep relationship with former All Black and Wairarapa-Bush rugby legend the late Sir Brian Lochore and his wife Lady Pam.

“It was outstanding,” Enoka said of the event.

“I think what I’ve learned over my years is trying to untangle the web that people think relates to high performance, but it’s just doing simple things really well, and if we can get people to understand that then it’s attainable for everybody.

“Wairarapa has a special place in my heart because of my connection with Sir Brian Lochore and Lady Pam, and her family. So to come back, I just feel the sincere warmth and the wonderful connection with the community.

“To see a full events centre and to be able to share my story and learnings is just special.”

Carterton mayor Greg Lang, who was in attendance, had nothing but praise for Enoka.

“The skills and the inspiration he brings to help take you forward as leaders in the community is just outstanding.”

“We would absolutely love more of these things, and the Carterton District Council would be really happy to partner them.”