‘Finding yourself and finding your purpose in life’

Even though Ali Foster’s three children are all grown up, she continues to dedicate her life to empowering children.

In part, she does this through her books, which tell tales that teach of Wairarapa history along with messages that encourage children to believe in themselves and “find the hero within”.

Ali also works as a teacher aide at Wairarapa College and, quite fittingly – considering her existence revolves around younger generations – she lives on the site of the old Matahiwi School, west of Masterton. 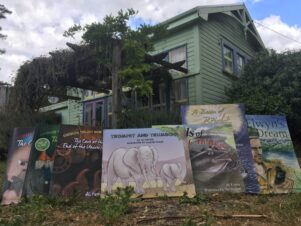 Ali Foster’s books outside the old Matahiwi School in Masterton.

The school closed in the early 1970s, before being utilised by the Scout Association, and then later by what is now known as the Department of Conservation.

Ali and husband Garry have for 30 years lived on the 1ha property, where the old basketball court, bike shed, and monkey bars still remain.

And on what was once the school playing field, they’ve created a food forest.

“It’s always felt like the energy of the kids is still here,” Ali said.

“I think that’s a big part of the property’s good feeling.”

As far back as Ali can remember, she wanted to write children’s books.

Now she’s had four picture books published, the most recent was launched in April 2019, as well as a junior fantasy trilogy.

Ali began her writing journey at age 15 and was re-inspired to pick up the pen when she had children of her own.

It was a “hard road,” with her stories turned down, one after another.

During these years she developed “a thick skin” for rejection, but persevered.

Then in 2008, at the age of 50, Ali’s dreams to become a published author came true when she won a competition with her story, Elwyn’s Dream.

It tells of the true tale of bird enthusiast Elwyn Welch, from the Mt Bruce area, and his small bantam hen and their journey in the 1950s to help save the takahe, which was thought to be extinct.

Ali then went on to write The Eels of Anzac Bridge, which covers the incredible life cycle of the long-finned eel, and a young man’s journey across the globe to World War II.

Eels migrate from New Zealand to the Pacific Ocean, where they breed and die.

“The adults don’t come back, but the babies do.”

This story of nature is mimicked in the soldier’s tale.

“He went to war, leaving his pregnant wife back here, and never returned home,” Ali said.

“It’s a dual story, but I didn’t know that when I was writing it.

“That story also talks about the importance of looking after our wildlife.”

A Beam of Bright Light, Ali’s third picture book for children, covers the history of Castlepoint lighthouse, which was built in pieces in Wellington in 1912 and then shipped and erected on the spot it stands today.

“Half the fun is in the research,” she said.

“There were all these shipwrecks on that coast, so they decided to build the lighthouse.”

That book was launched on the iconic landmark’s 100th anniversary.

All three books were illustrated by Carterton artist Viv Walker.

The book’s name was inspired by conversations she had as a child with her father around puns and wordplay.

“It’s about the special relationship between the matriarch of a herd of elephants and her great-granddaughter.

“It addresses the importance of passing on family history, as well as touching on the sensitive issues around memory loss.”

Ali’s third and final book in her Ginomees trilogy, which was illustrated with her own sketches, came out October 2019.

The first two books were written many years ago when she worked at Fernridge School.

“They languished in the bottom drawer for a long time until I finally made time to complete the third book.”

She said they were about a garden gnome’s journey to find the hero within.

“That takes some time, so be patient and brave, take chances, and just believe in yourself.”

Ali said the importance of nurturing and encouraging children shouldn’t be underestimated, with her goal being to “help them grow into great human beings”.

She also worked with Pahiatua School pupils, helping them write and illustrate their own picture book.

Pahiatua and Beyond was launched in April last year.

It gives the reader a bird’s eye view of the region, as a solitary tui flies off from Pukaha Mt Bruce in search of a mate.

A copy of the book was given to every family in the school of more than 400 pupils.

Ali said as well as writing, working with young people was her main passion.

“Maybe it’s because I enjoy looking at the world through a child’s eyes – with that same curiosity and wonder.”