Alex steps into the spotlight 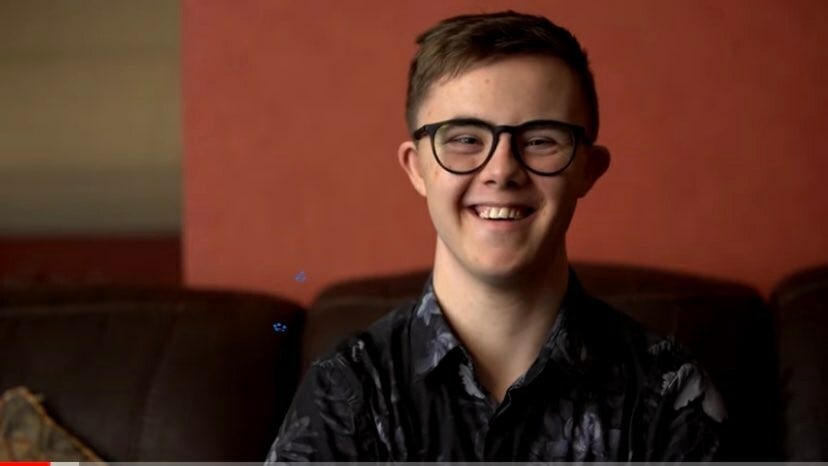 Disability no barrier for Alex

The Wairarapa College student has also danced in nationwide competitions, acted in community theatre productions, can pick up classic rock and bluegrass tunes on the guitar by ear, and has received a regional youth achievement award for his commitment to the arts.

A gifted but otherwise regular kid, who leads an action-packed life – and who happens to have an extra chromosome.

After birth, Greytown local Alex, now 16, was diagnosed with Down Syndrome (DS), a genetic condition caused by an extra copy of chromosome 21. 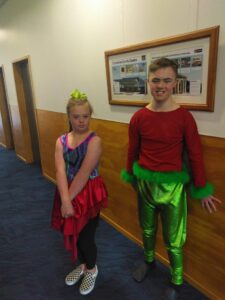 Alex Walsh and friend Ava Saba, about to go on stage for a production at Solway Dance.

Children with DS tend to have learning disability, low muscle tone, and difficulty with auditory processing and developing language – which, at first glance, could pose challenges for a young performer.

But Alex’s parents, Heather and Jim, weren’t prepared for their youngest son to take no for an answer – so they signed him up for the same activities as his brothers “to see what would stick for him”, starting with dance lessons at age 4.

Alex has not only stuck with dance, but has mastered ballet, jazz, contemporary dance and hip hop, and has studied jazz to Grade 9 and contemporary to Grade 7 under the DanceNZmade syllabus.

Alex relishes any opportunity to get in front of an audience: and, late last year, found himself in the national spotlight, with an appearance on AttitudeLive’s My Perfect Family, screened via TVNZ.

Now he has had a taste of the TV cameras, Alex has his sights set on an acting career – hoping to follow in the footsteps of other actors with DS, such as Shortland Street’s Jacob Dombroski and Libby Hunsdale, star of the New Zealand film Poppy.

Mum Heather says appearing on AttitudeLive was an opportunity for Alex to show other young people in the disability community, and their whanau, what they can achieve with encouragement and support.

“We didn’t see anyone like Alex on the TV when he was growing up. It is so important for people with DS to see themselves represented in the media so they can see what it possible,” Heather said.

“We hope that young people like Alex can see him dancing and think ‘I can do that, too.’

“Kids with DS are often told what they can’t do. But they just need to be given the opportunity.”

When Alex was born, Heather, a registered nurse, noticed something different about her third child – but doctors, she said, dismissed her concerns.

In his first few days of life, Alex was lethargic, struggled to feed, and his temperature dropped to dangerous levels.

He was admitted to the neonatal unit at Wellington Hospital – where Heather, fearing for her son’s life, arranged for a Catholic priest to come and have him baptised.

Heather and Jim consulted with a geneticist about future health risks – and were told, in response to questions about fertility, that they should “just get him a little dog if he wants a girlfriend”.

“That was completely inappropriate,” Jim said.

“They didn’t tell us anything about things like circulatory issues, what his low muscle tone would mean for controlling his bowel and swallowing, if he would have issues with hearing due to having smaller eustachian tubes.

“All of this we had to find out ourselves.”

Alex spent 10 weeks in the neonatal unit, only to return to Wellington Hospital at four months old with severe pneumonia. 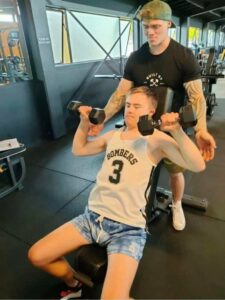 Alex Walsh, featured AttitudeLive on TVNZ, does a workout at Strength Nation in Carterton.

Heather and Jim said they once again dealt with insensitive attitudes from doctors – but Alex would go on to thrive and has been “extremely healthy” ever since.

Alex’s love for dance was apparent early on – as a toddler, he would watch older brothers William and Jacob during their classes at Hutt City Dance and “jiggle along to the beat”.

When he turned four, Heather enrolled Alex at the same dance school, where he was quick to make an impression.

“There was some concern that he was still wearing pull up nappies, but they were very accepting,” Heather said.

“They saw how expressive and musical he was, and they couldn’t say no!”

Alongside his brothers, Alex danced in “all manner of shows” and, on moving to Greytown, eventually joined In-Motion School of Dance, then run from Kuranui College.

In 2014, he was cast in an original show, When the Poet Dreamed an Angel, choreographed by teacher Justine Kingdon, with whom Alex performed a moving duet.

Inspired by his fearless performance style and clear passion, Kingdon nominated him in the Frances Clarke Memorial Awards – which recognise the achievements of young people with DS in the Wellington region.

Last year, Alex landed a chorus role Masterton Theatre Company’s production of Chitty Chitty Bang Bang – and “won over the audience immediately” – and has also been involved in performing arts at WaiCol, appearing in its ShowQuest entry and its musical production of All Shook Up.

His performance in All Shook Up, alongside friend Ava Saba (who also has DS), marked the first time students from the SLC had been in a WaiCol production – thanks to advocacy from head of music Cathy Mabey.

Alex particularly loved performing at the Michael Fowler Centre in Wellington for Showquest – as one of a dance troupe of “corporate bigwigs” in an entry about sustainable fishing.

“That was very, very fun. I love performing for lots of people,” Alex enthused.

When not dancing, Alex can likely be found with a guitar in hand – and is proud of having conquered Smoke on the Water, Highway to Hell, and Seven Nation Army by the White Stripes.

He has now added gym sessions to his busy schedule – joining Strength Nation to boost his fitness skills – and hopes to do work experience at a music shop.

Once he leaves school, he has one goal in mind.

“I want to study drama and be an actor. And be on Shortland Street,” he said.

“When I’m performing, I feel great.”