Four former Wairarapa students now studying at Lincoln University are heading overseas after each being awarded the Prime Minister’s Scholarship last week. Sixty-five students from the university were given scholarships to study in China, South Korea, Thailand, Indonesia and Brazil to improve understanding of New Zealand’s trading partners’ business practices and culture. In November Phoebe Topp, Tom Mckay and Lucy Hewitt will head to Brazil, while Callum Woodhouse is off to China. Ahead of their month-long trips, GIANINA SCHWANECKE spoke with the four scholars.

Lincoln Young Farmers vice-chair, Phoebe Topp said she was excited about the opportunity to compare Brazil’s farming systems with those of New Zealand, especially as it was her first time to South America.

“About 15 of us are going to Brazil in November. We’ll get to attend lectures at several universities and visit different agri-businesses. It’s going to be interesting.”

Brazil is home to the world’s biggest commercial cattle and beef herd and is the largest cattle meat exporter.

With a population of more than 210 million people, it’s also a far cry from Topp’s upbringing on a sheep and beef farm near Martinborough.

“I was astounded to be named as a recipient,” she said. “It’s a cool feeling. I’m going to put the money towards my student loan.”

As part of the scholarship she attended the co-op’s three-day shareholders’ conference.

“I learned so much. There were lots of forward-thinking ideas, it definitely got my brain ticking over and engaged.”

She’s already got a job lined up after her return from Brazil and is set to start work at West Wanaka Station, which runs 14,000 breeding ewes, 2000 deer and 1500 cattle.

“I got the job through word of mouth,” she said. “I’m extremely fortunate. A lot of students still don’t have jobs to go to after their exams finish.”

Her short-term goal is to gain experience on-farm, before branching out in the agri-business sector.

Fellow Wairarapa old boy Tom Mckay is, like Topp in his third and final year of a Bachelor of Agri-commerce degree at Lincoln University.

Mckay said he was thrilled to be a part of the trip.

“It’s going to be a treat — four weeks of travelling and seeing what they get up to over there. I’m sure what we learn will go a long way later in life.”

He said he wanted to go to Brazil to learn more about the world’s biggest beef producer and how it differed from New Zealand.

“I wanted to do Brazil because it’s similar to New Zealand in terms of what they produce but they face different issues compared to New Zealand. It will be interesting to see how they deal with those.

“You’re learning on the spot the whole time.”

He and Topp will stay on for another 10 days with some of the others, to explore other parts of South America.

When they return Mckay plans to work on the family sheep and beef farm in Alfredton before heading over to Canada later next year.

Lucy Hewitt, originally from Pahiatua, said the trip to Brazil was “a really good opportunity to get an insight into global agriculture markets”.

Hewitt, who is in her final year of an Agribusiness degree in Food Marketing, hoped the trip would add to her understanding.

“I thought it would complement my degree nicely,” she said.

“I’m really interested in beef and lamb. It’s a lot different to the way we are doing things here.

“I haven’t done much travelling so it will be quite cool.”

She said she was looking forward to the farm visits and that it would be a “valuable experience”.

Hewitt also encouraged others interested in overseas agriculture systems to consider applying for the scholarship scheme.

Heading to another part of the world is second-year Agricultural Science student Callum Woodhouse who will be travelling to China.

“It’s a great opportunity to see something elsewhere.”

He said studying at Lincoln University and moving to the South Island had given him a “taste” of agricultural practices in other areas.

“It’s the next step. China seems to pop up a lot in our lectures in terms of the future and where our exports are headed.

It was especially topical given the impact of African swine flu on meat exports.

Woodhouse and 15 other students would be hosted by local families in a billet-like system while they visit two universities.

A big part of the trip would also involve seeing how New Zealand products were marketed in Chinese supermarkets.

“We always hear about our products going over there and being sold,” he said. “It will be interesting to see how they compare to other things on the shelf.

“I think sometimes we forget who is buying our products on the other end.”

It will be his first trip to China, a totally different world from the Eketahuna sheep and beef farm where he grew up. 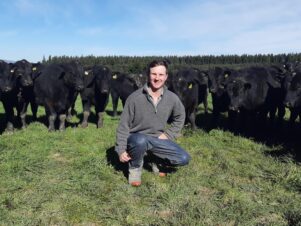