Wilde beside the pond where he’s seen ducks flourish, particularly after his trapping efforts. PHOTOS/ARTHUR HAWKES

Alan Wilde supports a diverse array of birdlife at his property on Fabians Rd outside of Greytown, and he’s achieved it through consistent trapping efforts over the course of several decades.

Many of the creatures he traps are feral cats – felines who’ve had litters of kittens in the wild generations ago that have been left to grow up feral.

Feral cats require no assistance from humans and can live fully in the bush, preying on native birdlife. These are considered different to stray cats and domestic cats, who also kill many birds.

Wilde is now calling for a more sensible approach to cat ownership, asking for more regulations to be placed on the animals, like there are with dogs, such as neutering, registration, and chipping.

He also highlighted the dangers of toxoplasmosis, which some cats carry.

Forest and Bird have estimated that New Zealand’s 1.4 million domestic cats were responsible for the deaths of at least 18 million animals a year alone, including 1.1 million native birds.

We meet at his property on a sunny Friday morning, a welcome change from last week’s rain. Then, after a brief hello, we set off in his ute to see the progress of his native, biodiverse oasis. 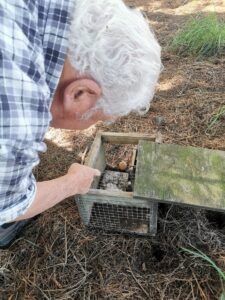 Wilde uses fresh rabbit and an egg. He’s found that egg attracts stoats, who tend to prefer it over the rabbit.

Wilde sets traps for ferrets, stoats, rats, and cats, and shows me the many different kinds he uses – the Timstrap, the DOC 200, and the DOC 250 – the 81-year-old paces from trap to trap like someone 30 years his senior.

Hunks of rabbit, either shot or roadkill, can be used to bait the traps, he said, which either guillotine the pest in the case of the Timstrap, or crush them instantly when they stand on a metal plate in the case of the DOC traps. Both methods kill the animal quickly and humanely.

Wilde has also found that some predators prefer certain bait. On top of this, bait has a shelf-life. Fresh rabbit develops a skin and stops being pungent after just a few days, meaning that it needs to be changed to continue attracting pests – this makes trapping and resetting an ongoing effort.

“Rabbit meat is good for ferrets, rats, and cats, but the egg is primarily for stoats, they don’t seem to be attracted by the meat, only by the egg.”

As we move through the bush, we navigate squares of corrugated iron sheeting dotted around the forest floor. Wilde said these are the perfect habitat for geckos and skinks to nest. Skinks have ‘vulnerable’ conservation status, so it’s important that habitats like these are created, with predator trapping and areas for nesting.

But trapping isn’t the only thing Wilde does. He’s also a committed tree planter – this year alone he’s already established over 300 natives. Greater Wellington Regional Council and the Department of Conservation have both been supportive of Wilde’s efforts and helped him on his property. Other landowners have also been aided by the QEII Trust, which seeks to protect areas of native woodland, and stops any trees from being felled.

“It’s got the law on its side,” Wilde said. “Some people down south have thought they can chop a few trees down and disregard it – the QEII Trust has taken them to court and it’s cost them a lot of money. 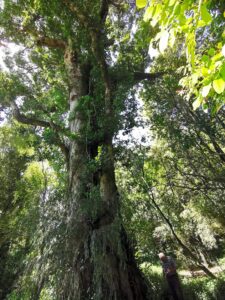 Wilde inspects a trap beside a magnificent 500-year-old Pukatea tree.

“But unfortunately, once you destroy native trees, you can’t just put them back.”

With the natives, and the trapping, Wilde has seen many native birds return – moreporks, kereru, tuis, waxeyes. The first species he saw in greater numbers were sparrows and starlings, which he said can give other birds confidence – in the same way that birds eventually crowd around a bird feeder after seeing that it’s safe.

Wilde is a good friend of gun dealer and conservationist Neil Hayes QSM. Hayes has also totally transformed his property and bred and reintroduced rare species of bird.

“That’s the thing about people like me and Neil [both in their eighties], we’re getting on and we’re looking for someone to pass the baton to, and there are obviously younger folk moving to the area, and people are more into conservation than I’ve ever seen it.”

Wilde said he would welcome showing younger folk around his property and teaching them how and where to trap, and methods for establishing native bush, which Wairarapa is sorely in need of.

Anyone wishing to take Alan Wilde up on his offer can get in contact with him through GWRC.